We saddled up and trailered the horses out before dawn. The sky was a deep blue, a few late stars twinkling between the clouds. The eastern edge of the sky was already lightening to white before the coming sun. We trotted out to the far end of the meadow, the occasional ring of horseshoes on rocks, and the scent of sage rising in the morning air. 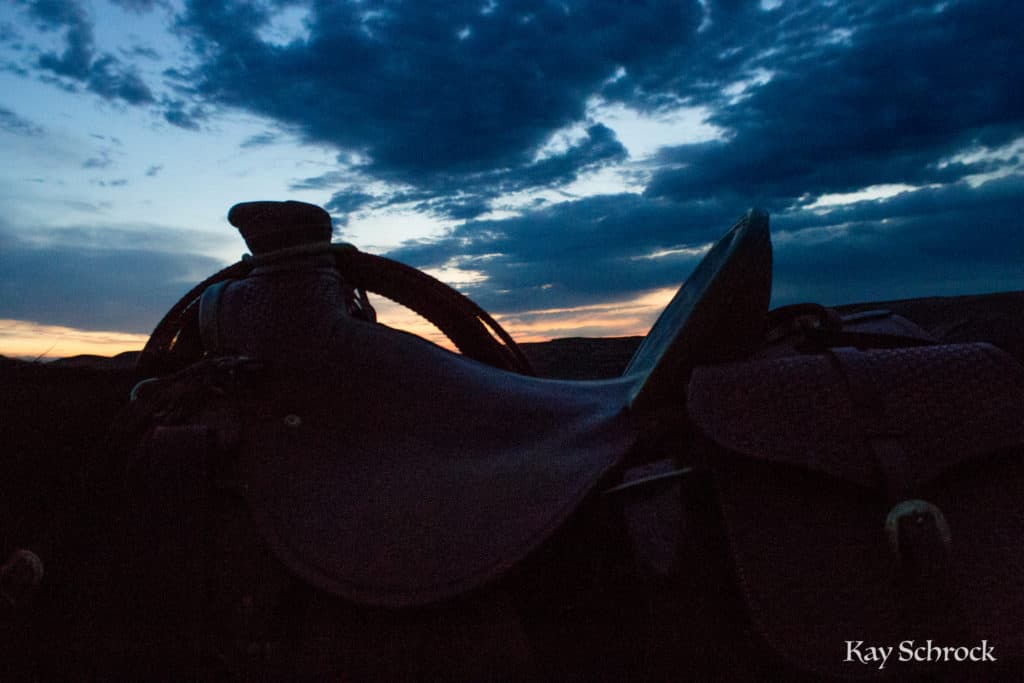 “Start gettin’ these cows up and moving,” my husband said to me as we trotted along, motioning to a bunch of cows lying in a grassy spot. He took our daughter and rode to the far corner, and I turned my horse towards the resting cattle.

I rode between the cows, slapping my chaps and talking to them. One by one they got up and began calling for their calves. Soon they were all calling, each cows’ calls worrying her neighbor.
I started them towards the north, and soon my daughter caught up to me and we worked the cows, while my husband rode the edges.

We had a little scuffle at the creek; we knew if we let one cross, they’d all want to backtrail and that would be very time-consuming. But my husband’s skill and fast riding turned them back.

Soon, I saw riders on the eastern rim – the other cowboys had arrived and were working the slope beyond the creek. I saw a couple dozen cows strung out, coming down the ridge, cowboys behind them.

Then the sun rose in a blaze of reddish light, sunbeams streaking up between purple clouds. The green summer grass and the dust from the cattle, all made a stunning backdrop for the cowboys and horses and slapping ropes. 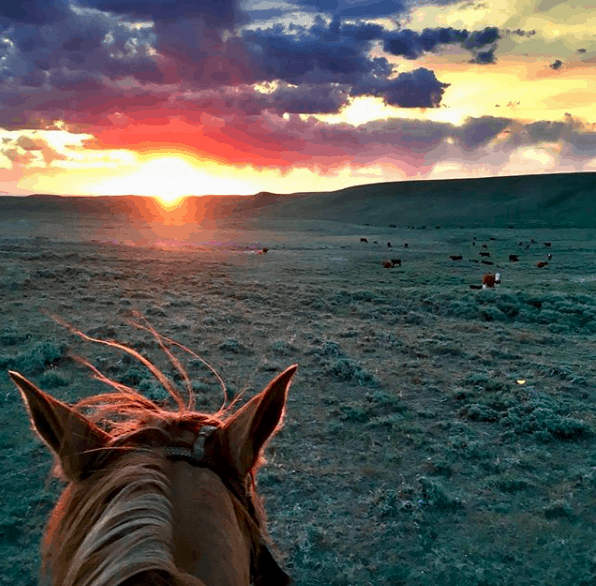 Without slowing my horse, I slipped my phone out of my pocket and snapped a few quick photos of the beauty that lay all around me. Summer had come to this high prairie country, and it was beautiful!

We pushed the cattle along the valley floor, through sagebrush and around sharp-rimmed gullies. Fat prairie dogs scurried down their holes, and crows cawed in the distance.

Sometimes a cow would plunge down into a gully, running the length of it hoping to escape the riders and hit the back trail. It was useless, for someone always chased her out again. But always some calves would follow her lead, and then we’d have to whoop them out of there, too.

The herd slowly moved further north, and as the sun rose, so did clouds of mosquitoes. We’d sprayed ourselves and our horses before starting, but still the bugs sat thickly black on the horses’ necks and shoulders. They whined in dark clouds around our heads, if of you missed a spot with the spray, they’d find it!

We moved the herd past a mud bog, and one calf thought it looked fun. He got mired up to his shoulder in slimy clay. Whether it was my daughter who chased him out, or one of the dogs, I didn’t see. But he managed to free himself and rejoin the herd, looking rather bedraggled in his coat of gray mud.

At the end of the meadow, the herd had to climb a small hill and turn slightly west to get to the new pasture. But they didn’t like going uphill, and as the sun was well up in the sky and the heat was coming, they wanted to stop and feed.

I have learned a lot about working cattle from watching my husband and the other cowboys, and trying to mimic their actions. I did the best I could, but that herd did not want to move up the hill. Soon other riders came back to help move them. 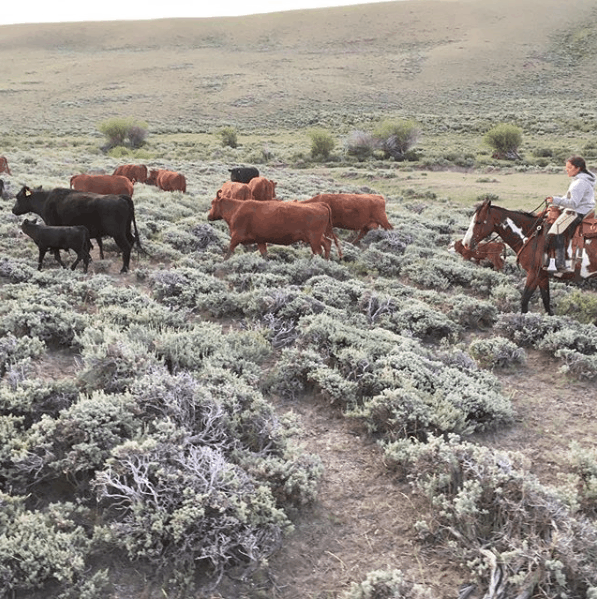 As I crested the ridge, my husband came riding over to meet me. “You guys keep these cattle moving,” he shouted at the riders near me, “and you come with me;” he said, “we need to ride down this way and check those trees,” he motioned as he turned his horse to trot towards the west.

I kicked my nag into a trot and followed him down the hill. We reached the trees and the deep gully they were covering. He rode around to the other side and I took the easy east side. I didn’t see any cattle, but I heard him crashing one through the brush. Soon, I saw a two black cows running up out of the gully. I stayed to the side so they could pass me and join the herd ahead.

Now we were in an area of grassy bogs. The grass grew in lumpy hummocks, and you could see the water oozing betwwen the green grass. It was too soft for a horse, but could hold up a light calf. We had to go around but the calves liked to run in there to escape us. That’s when dogs were invaluable. The cowboys with dogs would send them in, and those calves came flying right out! We hassled those calves around a section of bog that was 500 ft long or more.

A few head of cattle ran into a little patch of brush, but soon were driven out again. The lead cows had reached the gate, and the others were strung out behind, the experienced riders workin the sides, myself and the kids at the back, yelling and slapping our ropes at the stragglers.

Soon, they all were through the gate, onto the new pasture. The riders all strung out by the fence to wait for the cows to mother up and settle. Each cow walked around and called until she found her calf. Then they’d walk off together. 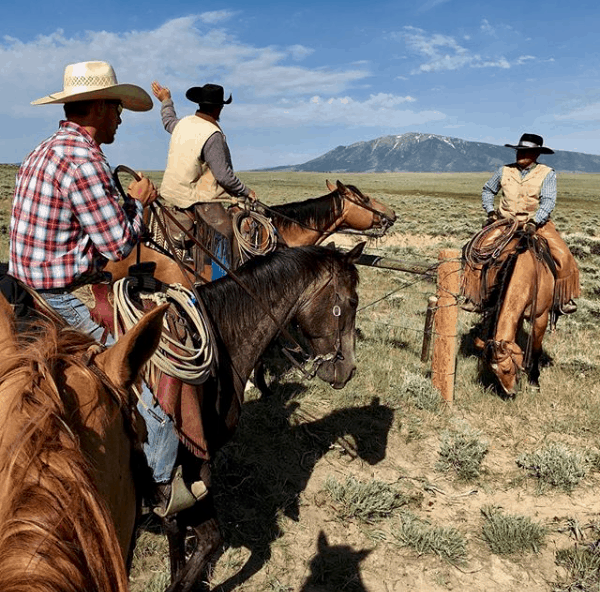 Cowboys debriefing after the drive.

My man roped a couple of leppies* and waited with them while the rest of us trotted back to the trailers. We had all removed our jackets by now. The sun was high overhead and I thought it felt great! (Though some of the men thought it was hot?) .

I slipped the bridle off my horse, put the halter on him, and loaded him in the trailer. I drove down the dirt road to where my husband was waiting with the calves. A couple cowboys helped him load the calves into the trailer with the horses, and we headed home.
.
*Leppy: a calf whose mother has died, and it needs bottle fed. Sometimes it has a mother, but her bag is ruined or she refuses to allow the baby to suck.

We are a participant in the Amazon Services LLC Associates Program, an affiliate advertising program designed to provide a means for us to earn fees by linking to Amazon.com and affiliated sites.
51 shares
Menu