Home » How to Graft a Calf.

I thought you may enjoy seeing how we care for orphaned calves, on the ranch. Do you know how to graft a calf?
Seasoned mama cows are usually pretty good mothers. But the first time heifers are often less…motherly. Sometimes they will refuse to let the baby suck milk, sometimes they even kick their babies.
When the new mama won’t let the baby suck, we  try to find a cow who will adopt it. However, since most cows aren’t too interested in some other cow’s baby – we must convince her to adopt. 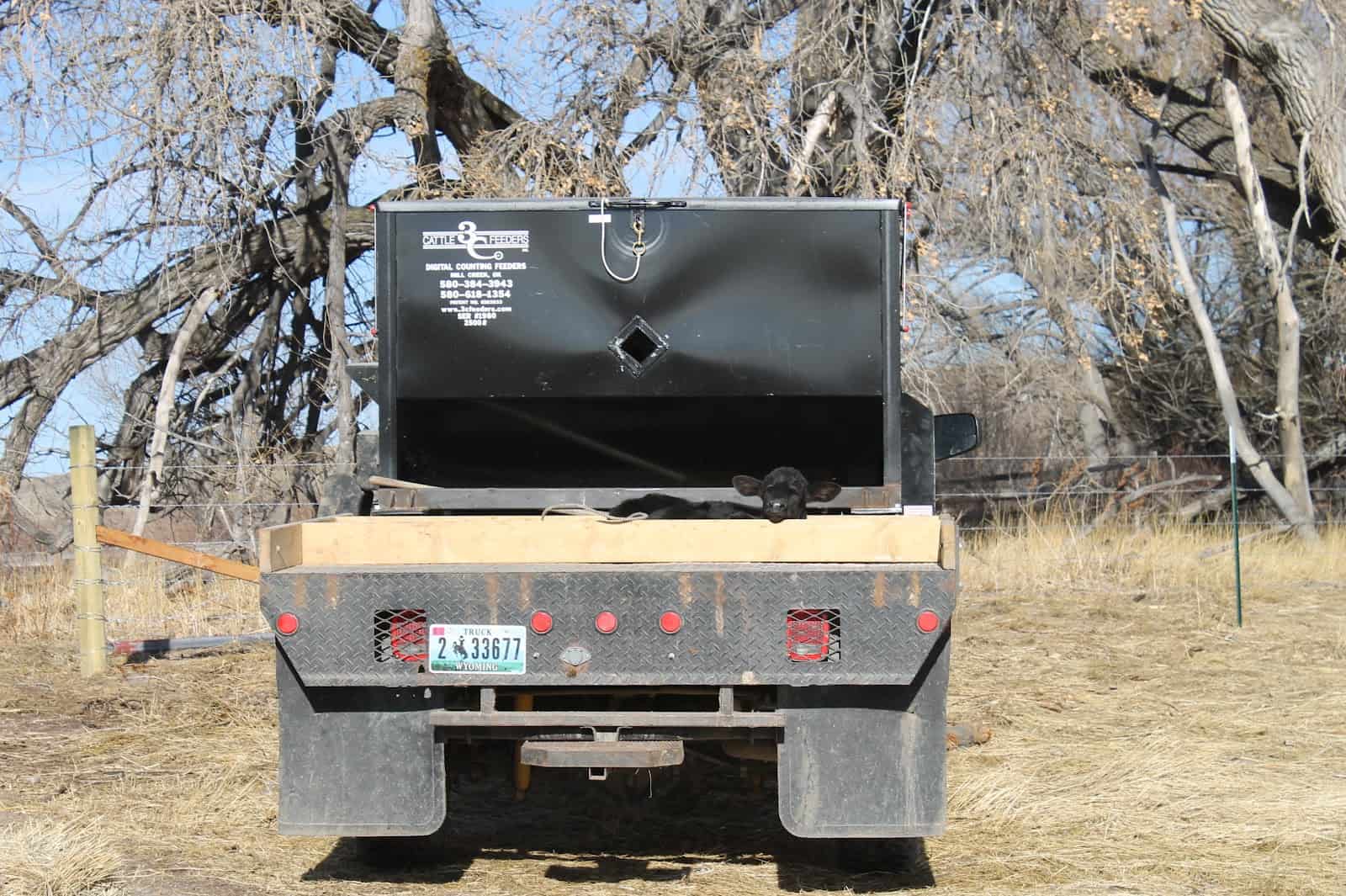 Here is an abandoned baby – only a few days old, or less.

How to graft a calf

We take the calf that has been rejected by his mother, and give it to a cow who’s calf has died during birth.  This works best if the live calf is only a few days old, but it often works with older claves too.

Cows identify their offspring by scent, so getting some of her dead calf scent onto the orphan calf is the most important part of grafting a calf.

If the calf is dead at birth, don’t even let the cow lick it – she doesn’t know which calf is hers till she licks it. Take it away immediately, and rub some of the birth fluids onto the live calf. Bring the live calf to her and she will probably take it immediately.

If that doesn’t work, or maybe her calf lived a few days, then you have to take stronger measures, because the cow now knows which is her calf!

So, Cliff  has to do the not-fun part of cowboying, and skin a calf that has been dead for 2 days. This calf died during or shortly after birth.

First, he cuts the skin off with a skinning knife. Starting at the breastbone, he makes a cut to down the belly, then out each leg a few inches. 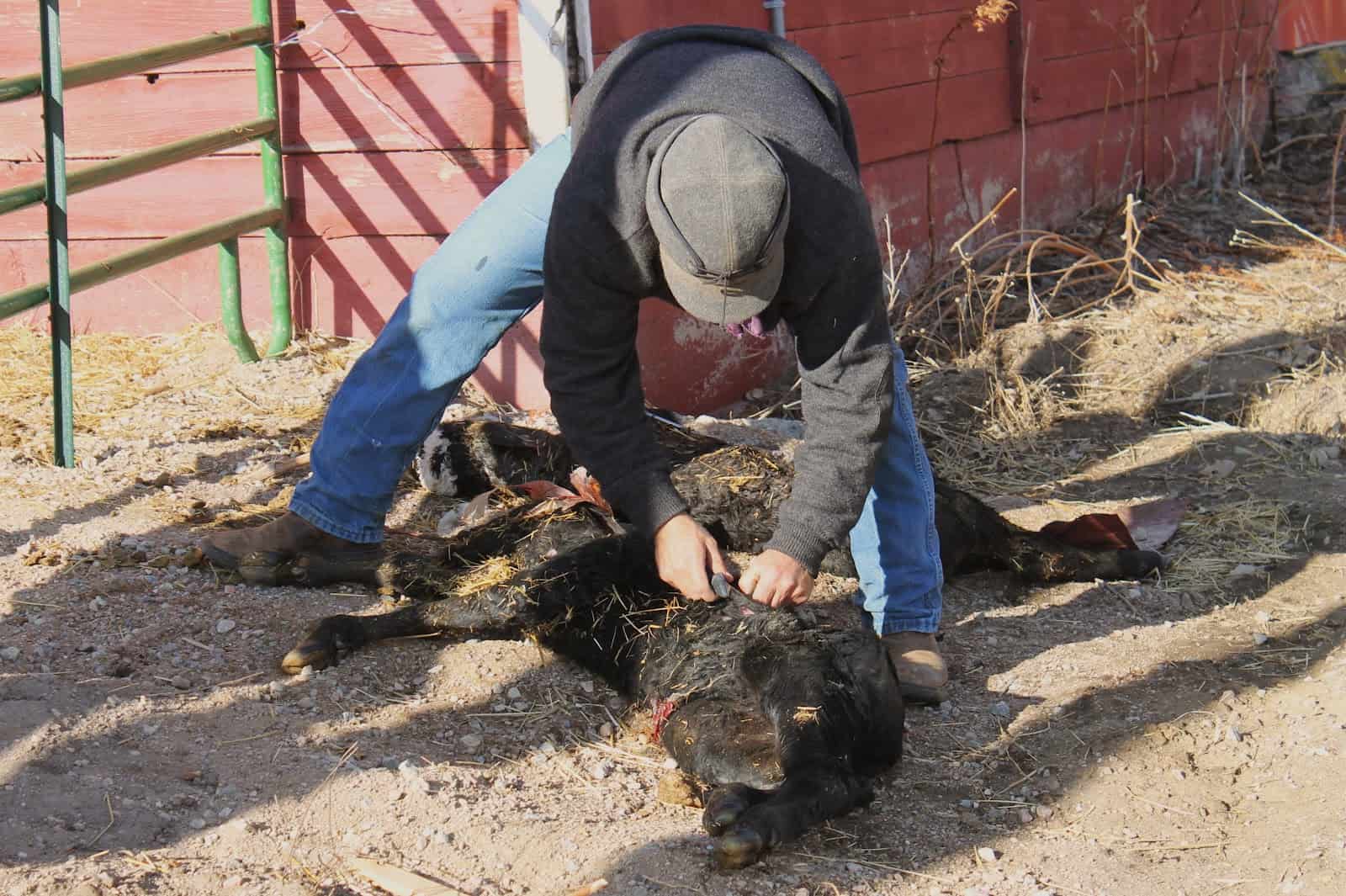 Meanwhile, he has tied-up this live, orphan baby by the legs, so it can’t jump off the truck and hurt it’s little self. 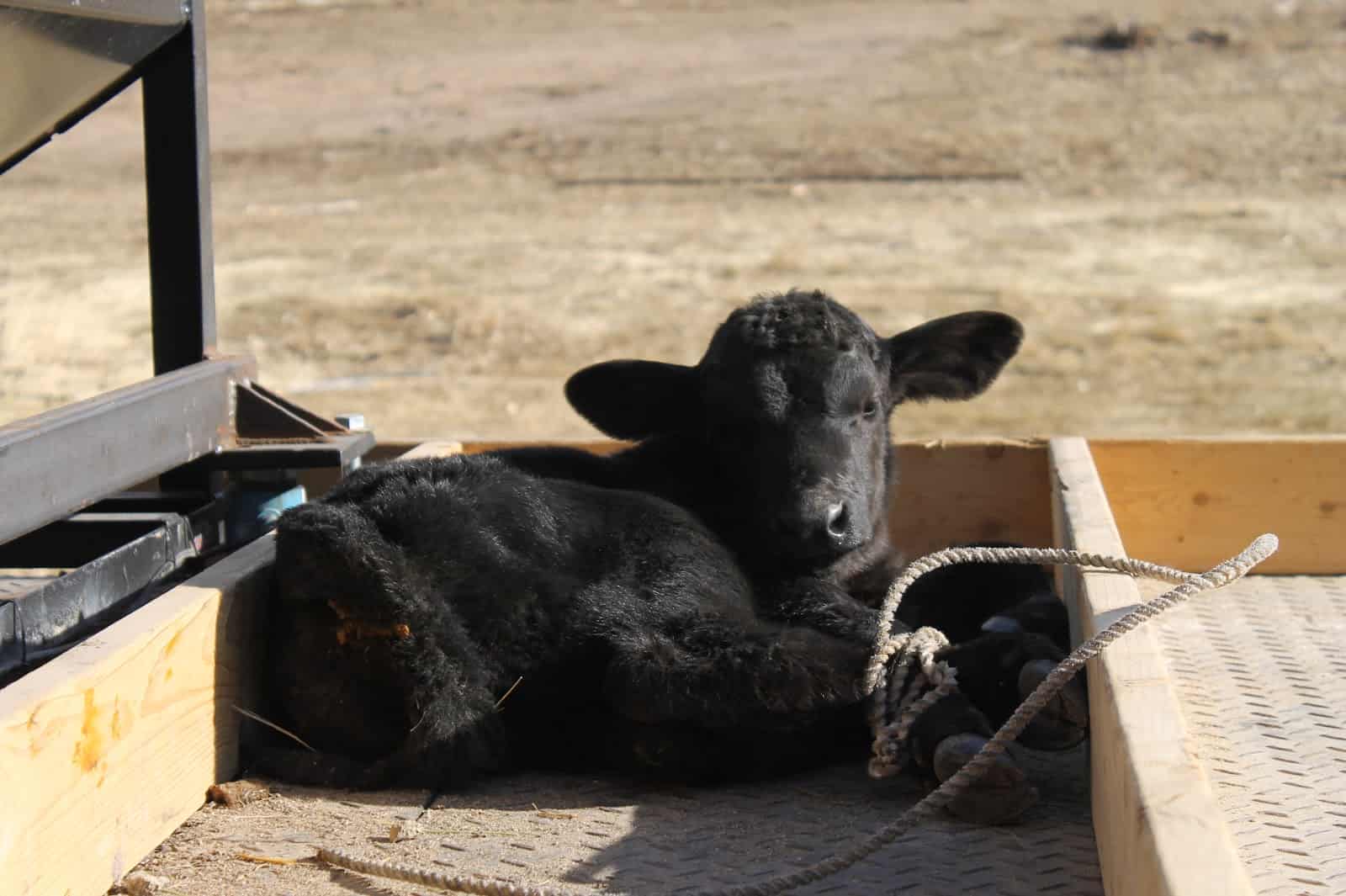 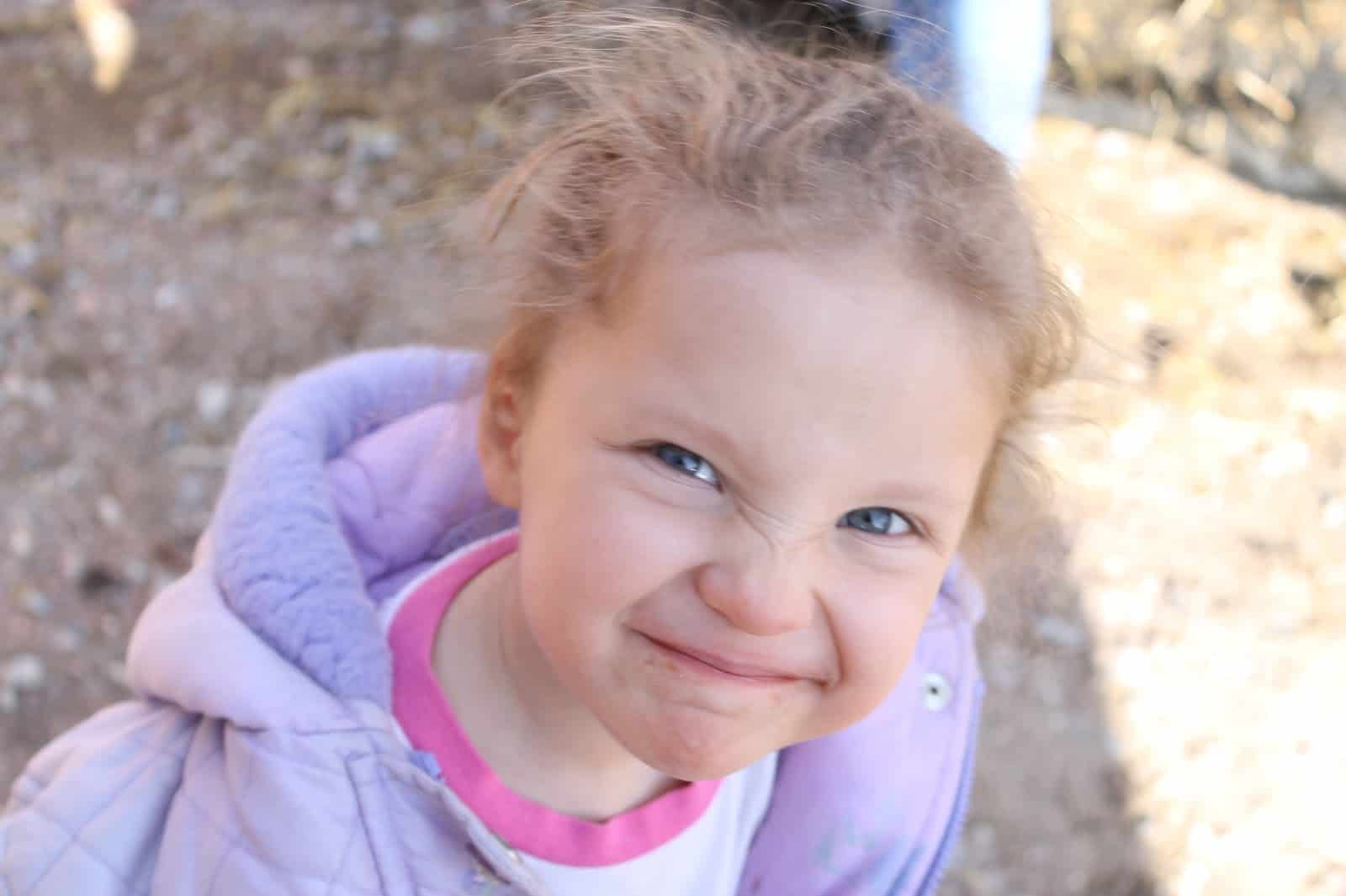 My trusty sidekick is always standing ready to help… or just make me smile!

Cliff slipped a rope around the calf’s neck, and lead it to the barn. 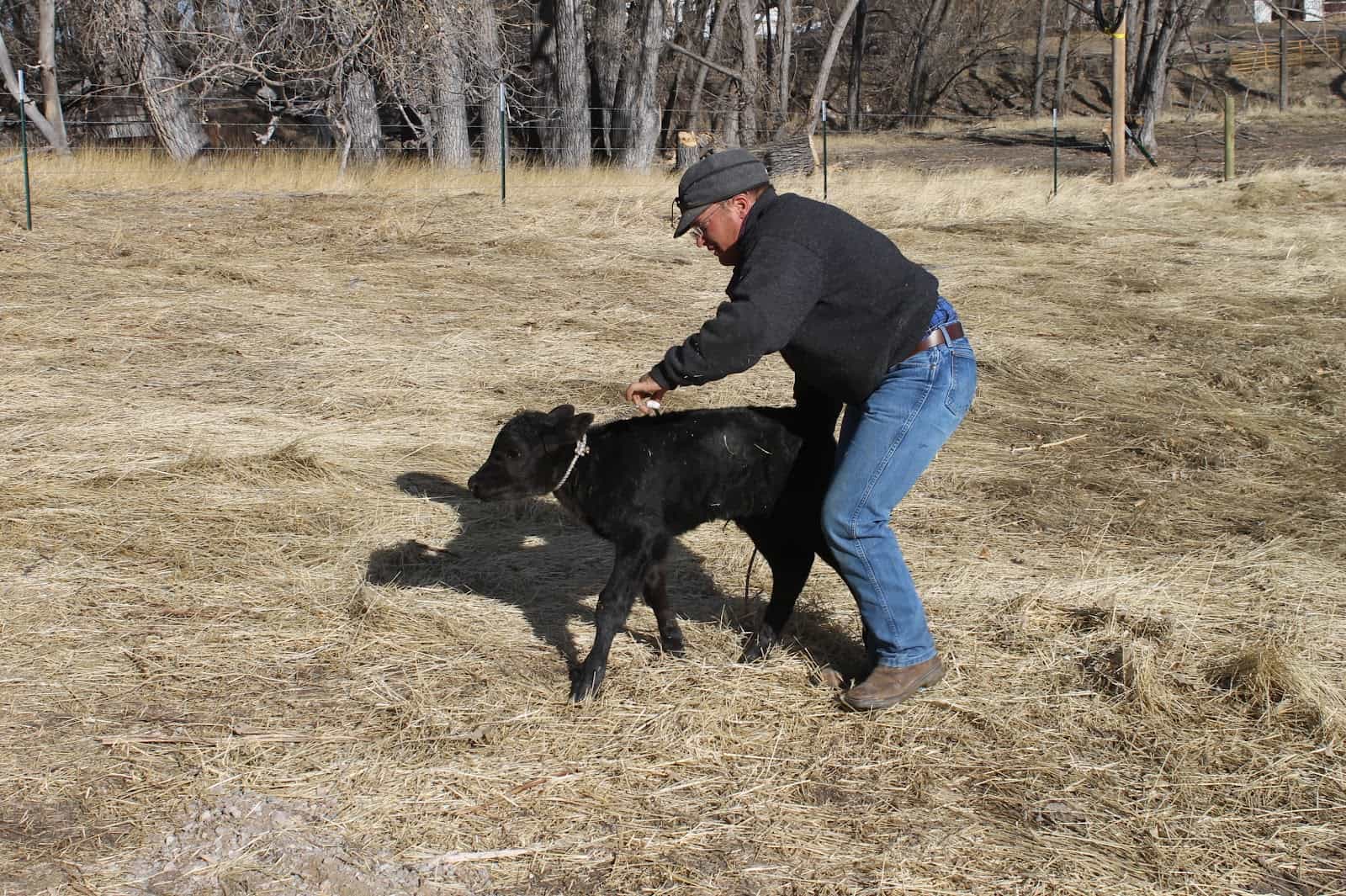 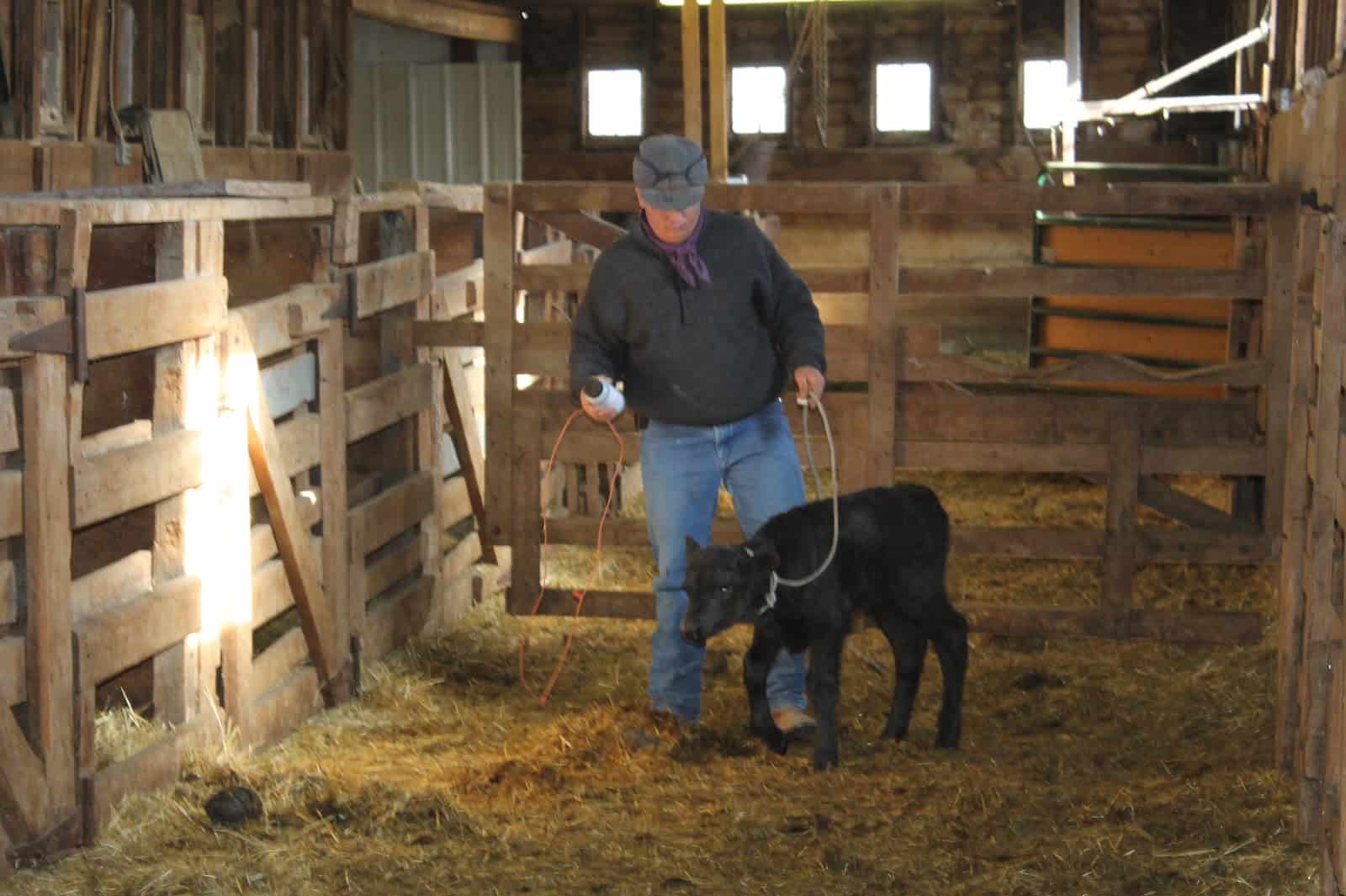 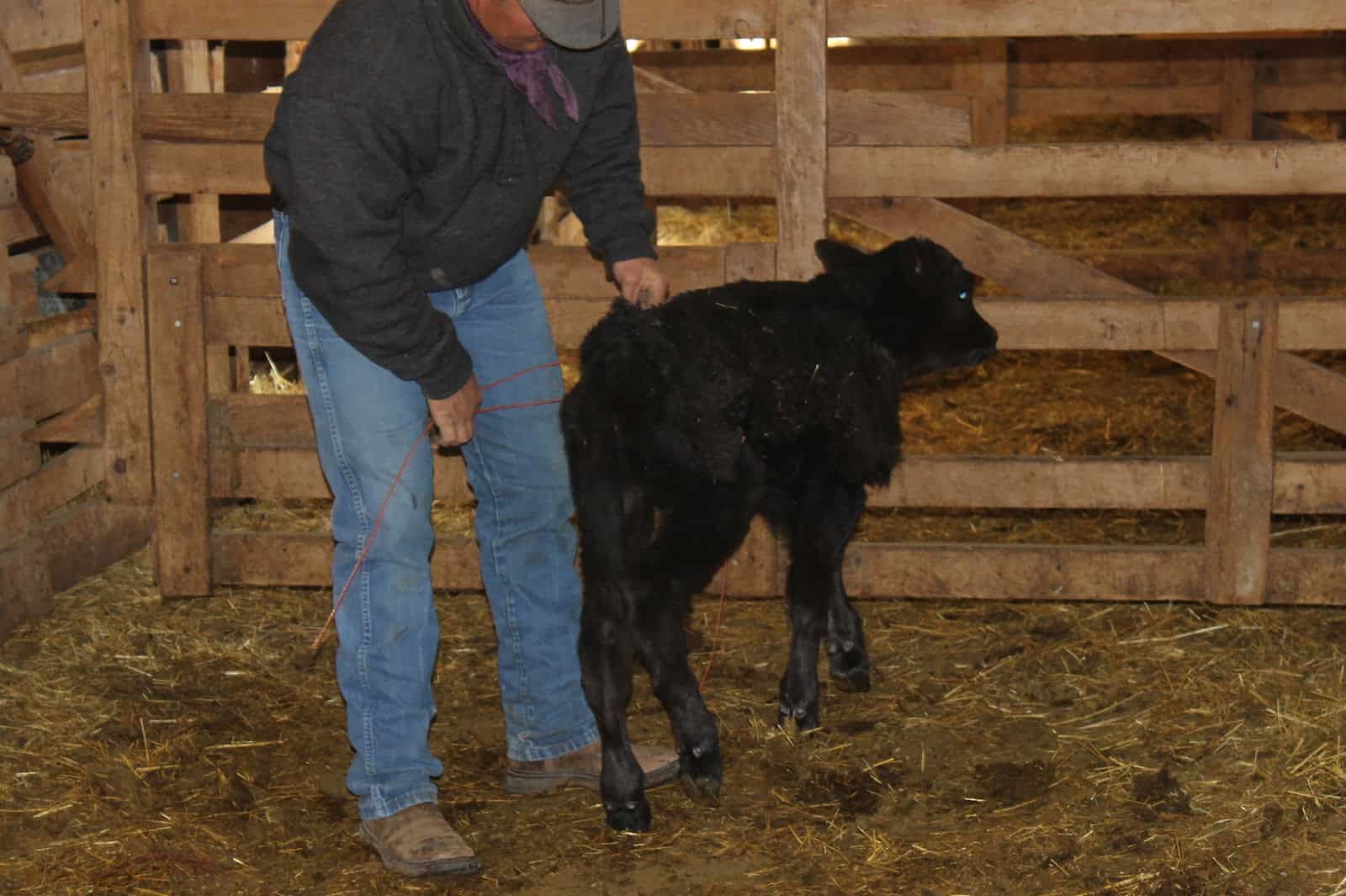 The idea is that if the cow smells her calf’s skin – she won’t know (or care) if it’s actually a different calf. Then the abandoned/orphaned calf can live in disguise as her own. And everyone will be happy. 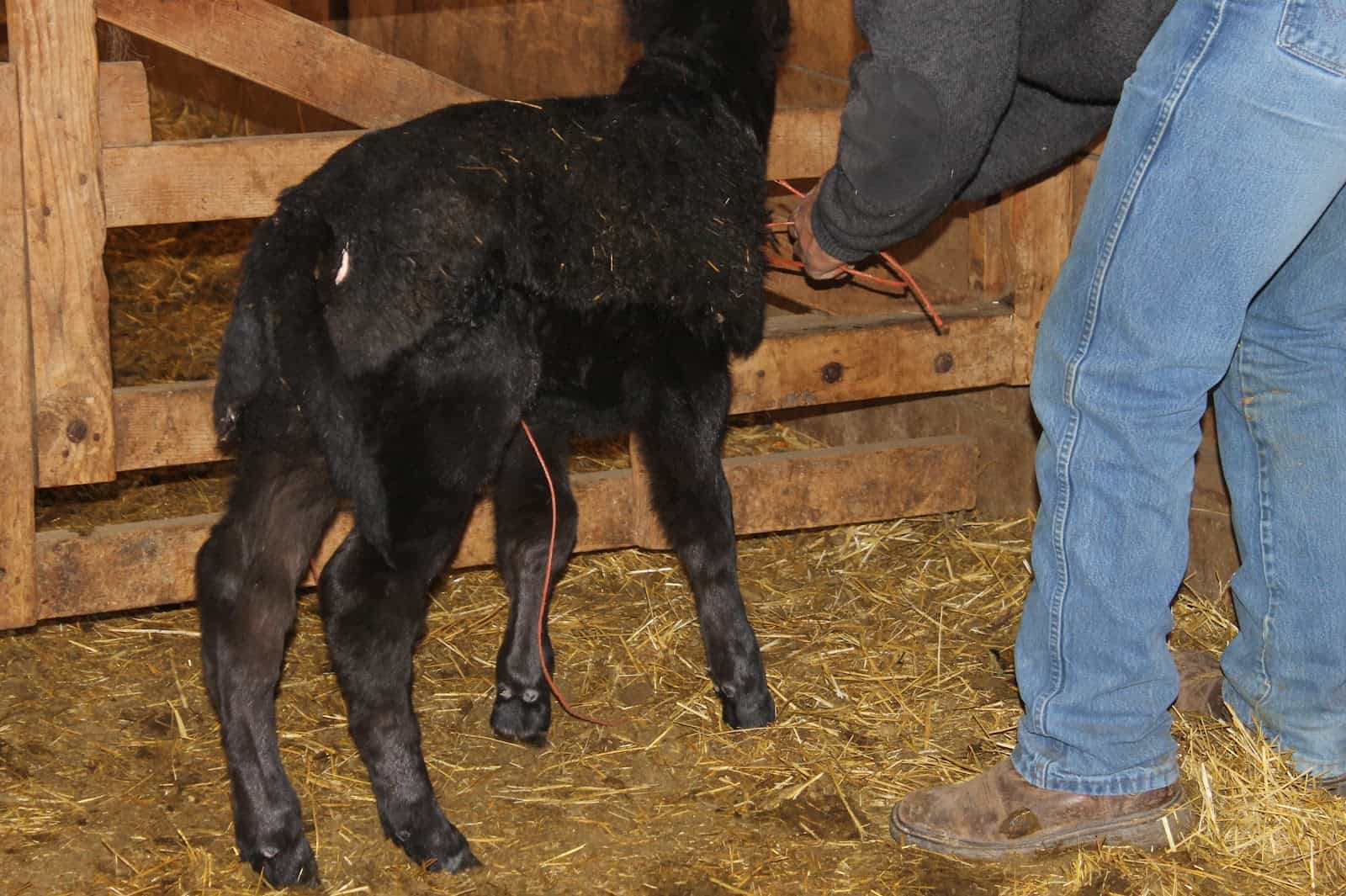 Sometimes it works – and sometimes it doesn’t. Here is the mother of the dead calf.

Push the abandoned calf inside the calving pen. 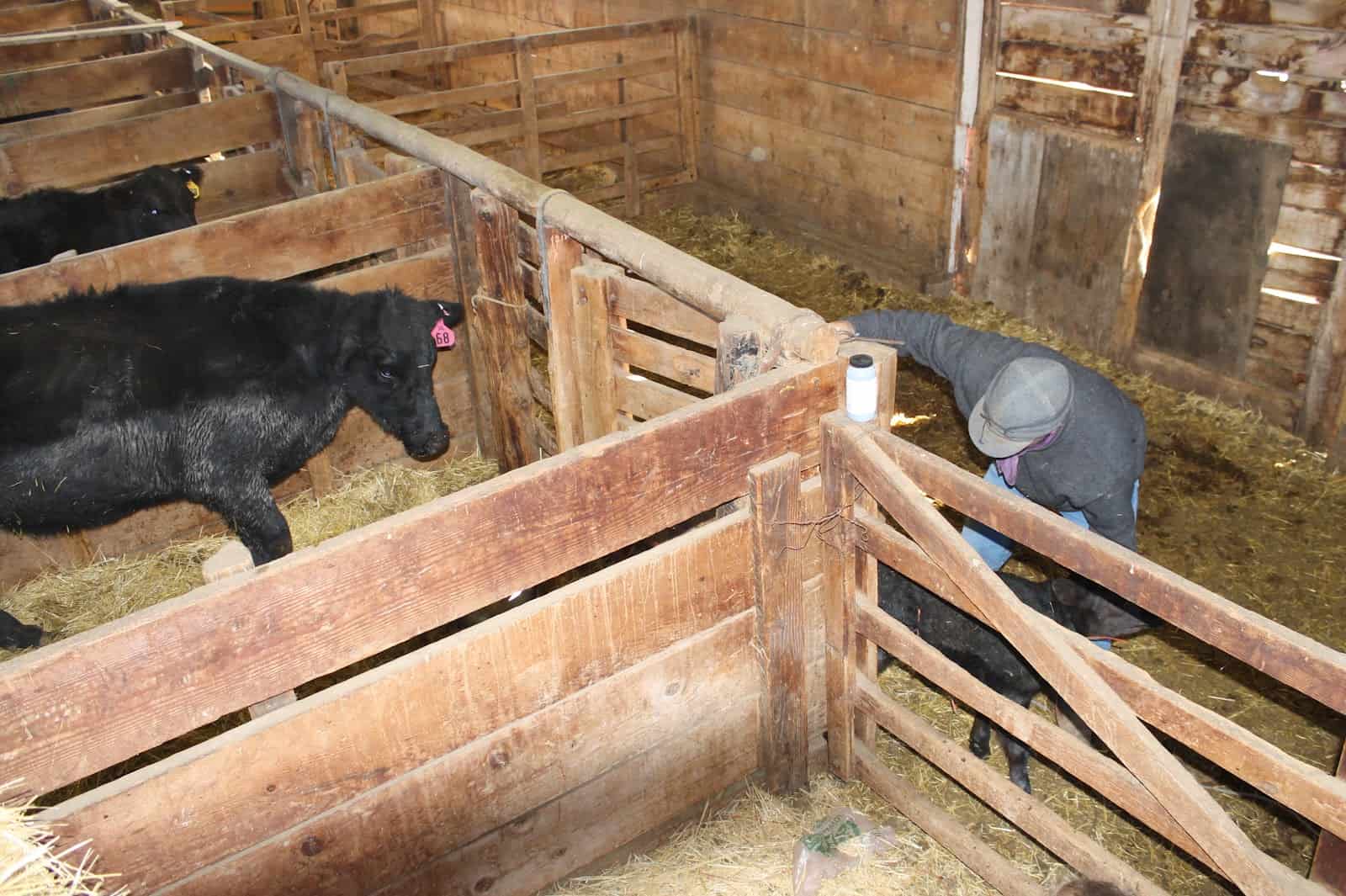 The cow sniffs the calf warily, unsure what to think of this new little babe who smells kind of like her calf. This is the moment of truth! Will she accept him or not?? 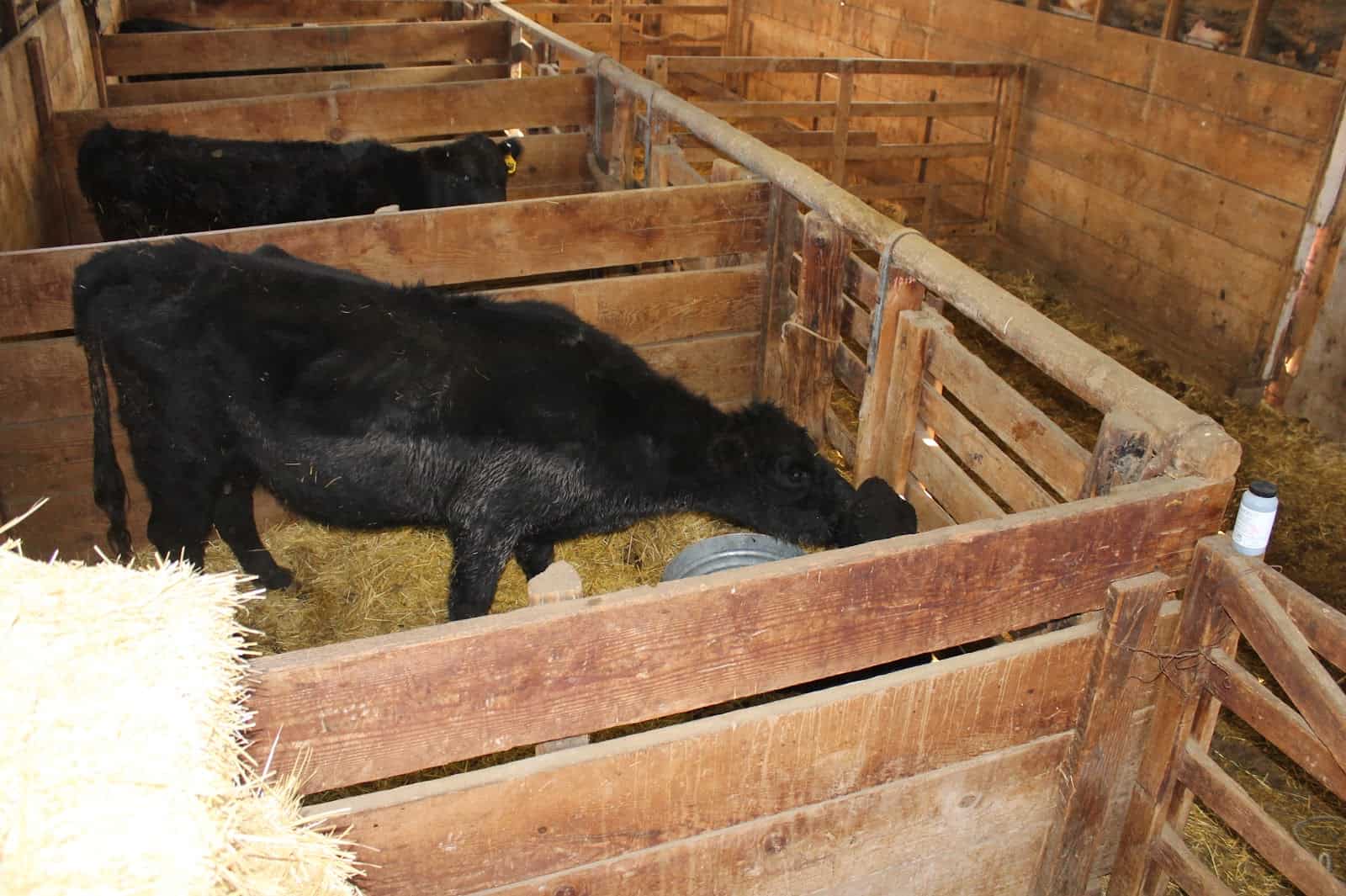 Success!!! Within seconds, that hungry baby went for the dinner table, and she let him. The hungry baby has a new mama, and the sad mama cow has (unwittingly) been comforted by what she thinks is her own sweet baby. And we don’t have to bottle feed this calf. 🙂 Everyone is happy. 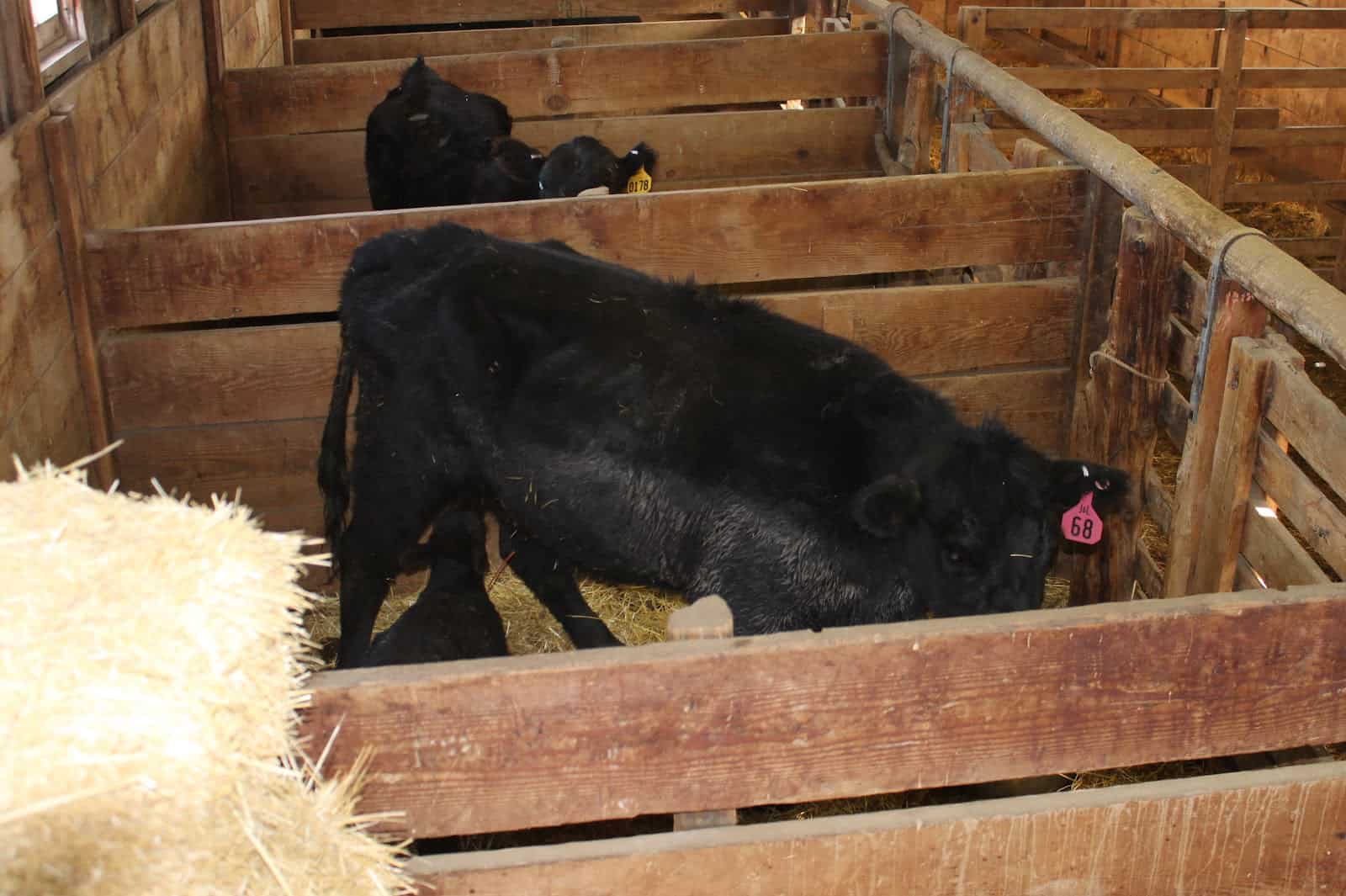 And if you think cows don’t get sad, well, you should’ve seen the poor mama cows who lose their babies. They stand beside them and sniff them and bawl.
It’s always good for the cow, for the calf, and for the ranch, when we can successfully graft a calf. 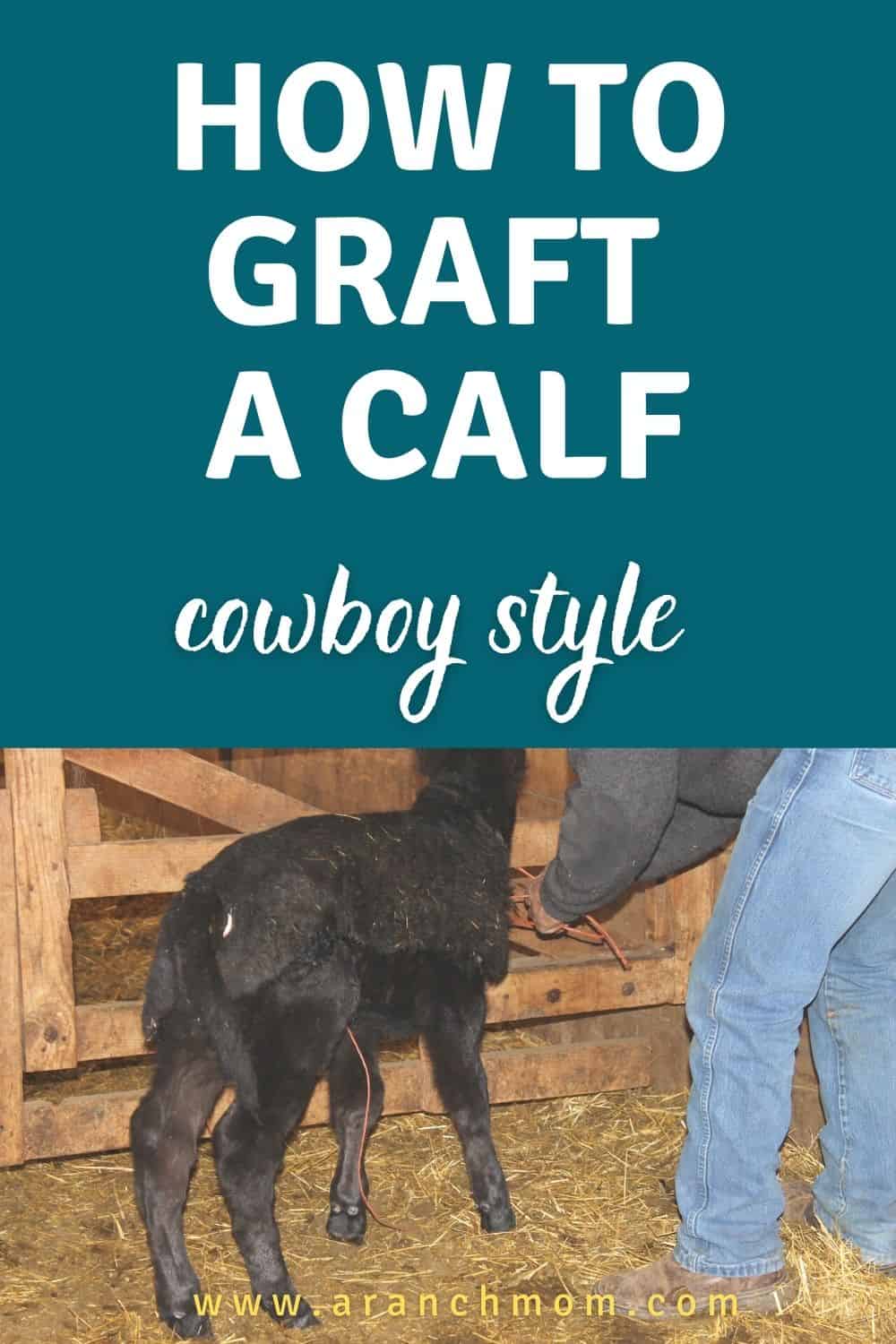 We are a participant in the Amazon Services LLC Associates Program, an affiliate advertising program designed to provide a means for us to earn fees by linking to Amazon.com and affiliated sites.
1 shares
Menu