Home » Don’t help with fall processing if you are pregnant. 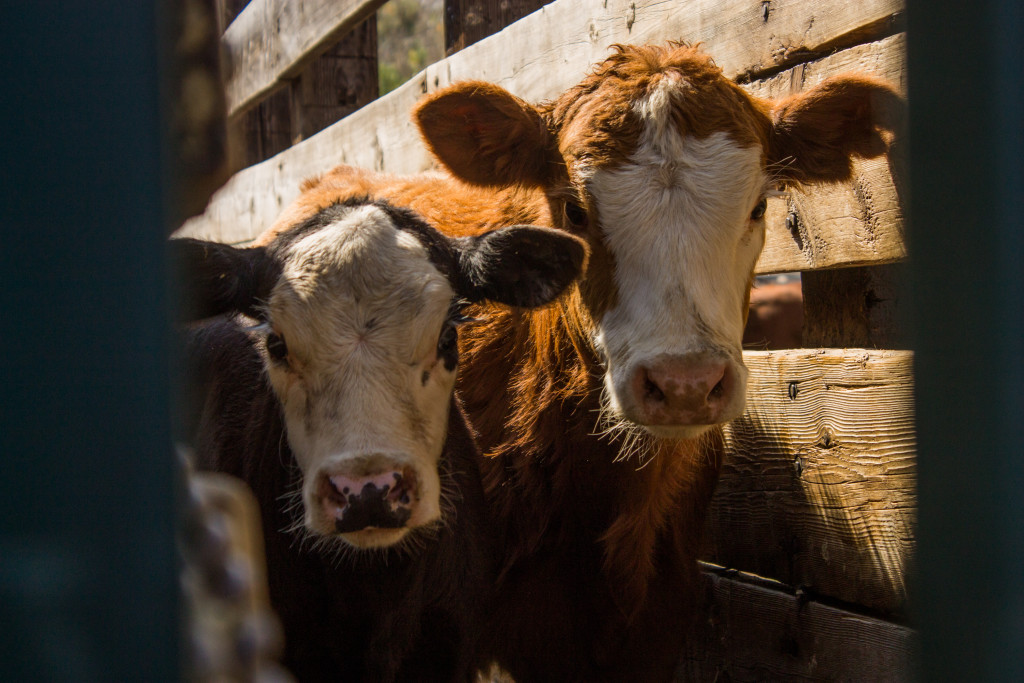 The sun shone weakly through the clouds, but the sharp west wind blew all the warmth away before it reached the ground where I was standing. I pulled my gloves on, and then turned to the car where my kids were waiting.

“OK, kids,” I said, “just play in the car, or, if you need something, I will be over there in the barn, OK? Just be careful of the calves when you walk through the corral – they might kick if you get to close to their legs.”
“OK, Mom,” Jenni agreed, picking up the crayons she had brought along.
I cracked open the windows, and then put the keys in my pocket. I wasn’t about to have them start the car, or anything crazy like that! I checked everything again – they had water, snacks, toys, blankets… they will be ok, I told myself, I can watch them easily.

But it was still hard. Hard to walk across the yard, and leave them there in the car. I was still paranoid from our recent loss. There is no water in the canal, I thought, there is no way for them to hurt themselves. Relax, Kay! Loosen up!

I flipped the latch up on the gate, and slid the bar back. The gate squealed as I pushed it open. I shut it and walked gingerly around blobs of cow manure. The wind blew cold on my neck, so I wrapped my wild rag tighter, and zipped up my coat as far as possible. I instinctively put my hand on my pregnant belly, as I looked over to the other side of the pen, where Cliff and Bill were working on the first batch of calves. I was a little late. Oh well. This shouldn’t take too long, I thought. I was here to help Cliff with the fall processing of yearlings. 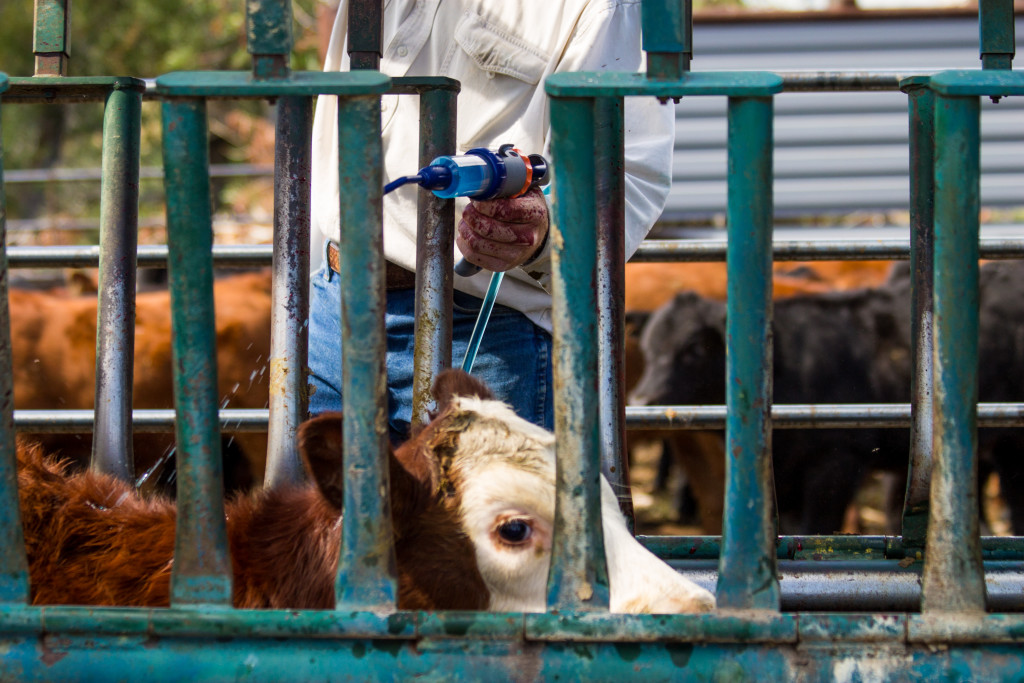 I stepped into the lean-to part of the barn, and watched as Cliff quickly injected the bawling calf with a needle full of medicine. There was a slight sizzle as Bill pressed the red-hot branding iron against the side of the struggling animal. Smoke curled up, and when Bill removed the iron, there was a perfect brand on the hide. Cliff pulled some handles, and the chute clanked open. I moved aside as the calf bolted from the chute – bawling his frustration.

I waited while the guys worked on two more calves, then I prodded the rest of the calves in the chute up towards the front. There were several swinging doors in the chute, that only opened one way, so when the little animals were through, they couldn’t go backwards, they could only go forwards. They heard their buddies bawling, so they dug in their heels, and bacedk up. But the swinging doors kept them from backing through, and an occasional shock from Bill’s electric prod would send them into the front of the chute.

I walked back to the rest of the calves, all bunched in the corner of the alley. They just bunched together more, till they were almost climbing over top of each other. I gingerly prodded one calf, and sure enough, he kicked. High and fast. I yelled in alarm, and then shook my paddle at them. Little beads inside the paddle made a racket – designed to scare cattle, so the cowboys wouldn’t have to use their voices so much. It’s known as a rattle-paddle. The calves ignored the paddle, so I had to resort to poking and yelling at them. 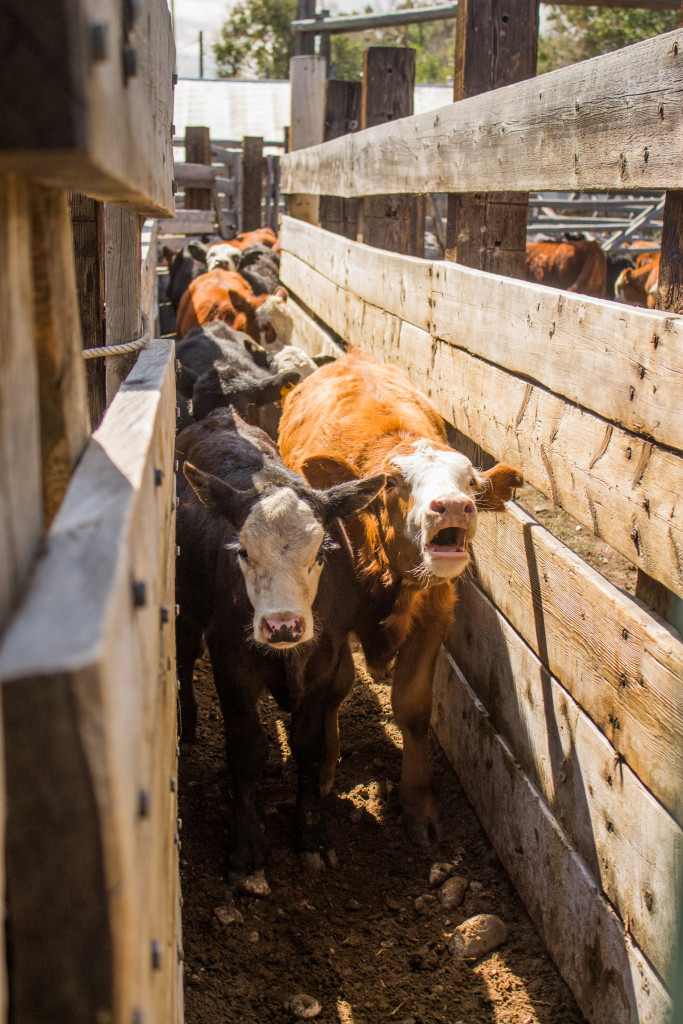 I finally got one to run away from the huddle, then they all tried to follow him. I ran to the gate and nearly got run over when I tried to shut it in front of a barreling calf. I shook my rattle-paddle at it, and it galloped off, back to the corner. I went through the gate, then latched it.

Then I opened the gate to the little round pen, and tried to get them to run in there. Yeah. Right. They weren’t going anywhere near That Place. I ran around after them, shaking my rattle, and yelling.  Poking them when I thought I could do it without getting kicked. Finally, three calves ran into the pen, and I quickly slammed the gate behind them. I looked at the chute, and they were working on the last calf. Six calves while I rounded up three? This was not good. I will have to get faster than this if I want to keep up with them. 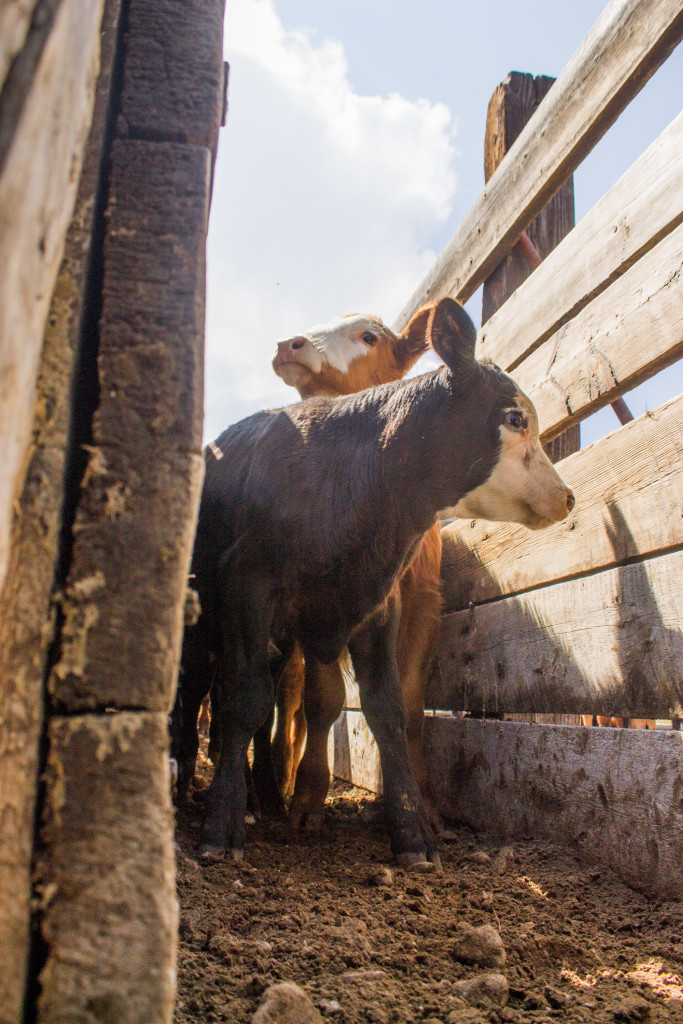 I jammed them as far forward in the chute as possible, and then ran back to the alley. I gritted my teeth, and took a deep breath. I shouted at the calves, and shook my rattle-paddle, and whacked them as hard as I could. They bunched up closer. I managed to get a small bunch to break away from the rest, and into the small pen, but despite my best efforts, Cliff had to come back and help me run them into the chute.

I was starting to pant, and my stomach was churning from the smell of burning hair. The wind was blowing the smoke and stench from the branding right through the lean-to and back to where I was working. It was a bad smell anytime, but my sensitive pregnant nose was nearly overcome. I felt like throwing up. I swallowed a few times, and willed my stomach to settle. I walked back to the end of the alley, trying to get as far away from the smell as I could. The smell was not so strong back there. Or maybe it was just overpowered by the rank odor of fresh cow poop. At least its a better smell, I thought.

“Mom?” Frank was climbing up the fence, straddling it he said; “I need to go to the bathroom.”
“There is a bathroom in the vet room. Go to Daddy, and he will show you where it is, OK?” I looked over to the car. Jenni’s head was visible in the car, but what caught my attention was the car itself. The wipers were flopping, the right turn signal was blinking, and the door was hanging open. Help us all, I thought. We are gonna have a dead battery soon. I clambered over the fence, and went to shut off the lights. I gave Jenni instructions about what her and Franklin were, and were not allowed to play with in the car. 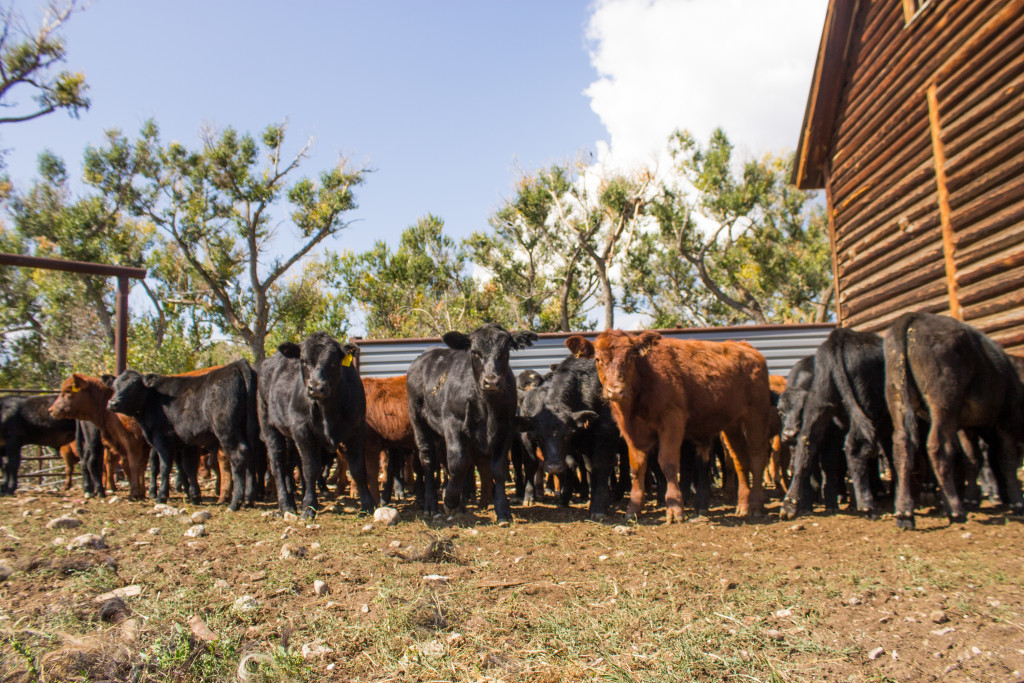 Back to the alley. Running. Shouting. Prodding. Waving my arms. Slamming the gate. Pushing the gate in the round pen as hard as possible, and then realizing that the calves were a lot stronger than I was, even if they were only a few months old. I got splattered with cow poop when one went right in front of me. I poked one, and the calf kicked so fast and close that I felt the air from its dirty hoof, as it came within millimeters of my hand. All the while, the stench of burning hair was floating out over me. The wind no longer felt cold. I was sweating. My stomach was churning. I was getting madder and madder at the calves. I would’ve kicked them if I hadn’t been so afraid of being kicked a lot harder in return. (kicking is not recommended – it was my first experience working calves, and I never knew how frustrating they can be! )

Finally, I managed to fill both the chute and the holding pen. So I went up and watched Cliff and Bill. They branded, ear tagged, and gave shots in a smooth rhythm. Never making one extra move, just doing everything in a efficient, calm way. 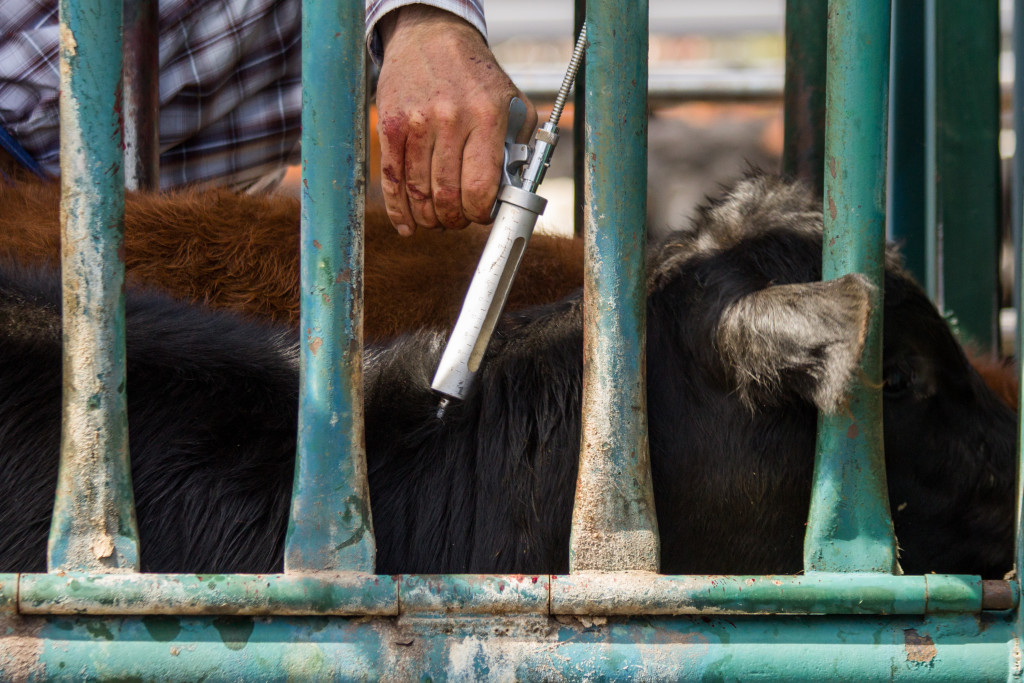 The afternoon had slipped away into evening before we finished.  I was bone-weary, my feet almost had blisters on them. The sun was sinking, and the wind was getting colder, as I walked slowly back to the car. All I could think about was a hot shower.

I sat down in the car and smiled at my kids.

We are a participant in the Amazon Services LLC Associates Program, an affiliate advertising program designed to provide a means for us to earn fees by linking to Amazon.com and affiliated sites.
5 shares
Menu