“Would you like to help me move these cows tomorrow?” My husband asked as we bumped over the pasture on the 4-wheeler. He’d been so busy lately, I grabbed any chance I could to spend time with him – including hitching a ride on the 4-wheeler.

“Sure!” I agreed, smiling. I was ready for horseback work, after months of winter, surgery, and recovery. I feel great and enjoy working outside. 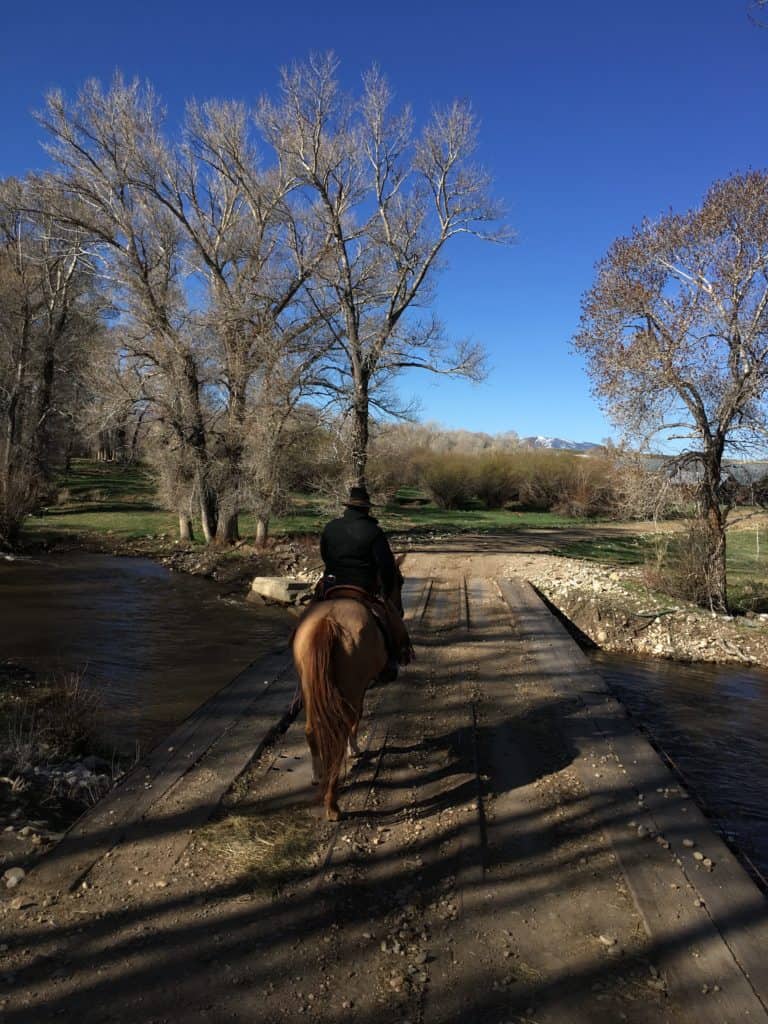 Starting out, crossing the river.

So the next morning we saddled our horses and were out in the pasture by 7:30 am. The cows seem to move better early in the morning, so we like to start early.

Cliff rode up one side of the pasture to clean out a patch of brush, and I rode around the other side – the ‘easy’ side. The problem was, I didn’t realize that side was boggy. I knew they had irrigation started, but didn’t realize it had gotten so soggy.

The ground started squishing underfoot, but I thought we’d ‘hurry up and get through it’, only, it was getting worse instead of better! My horse’s feet started sinking in over her hooves, and then to her ankles, but when she took a step and sank in over her knees, I bailed!

The ground was just humps of grass surrounded by water, at this spot. When I missed a grassy spot and stepped in the water, my boot sank into the mud, and the water poured over the top of my boot. Now this may sound funny to you experienced horsemen, but for me, it was very frustrating and frankly, a bit scary. Some places the ground felt spongy when you stepped on it – like standing on floating sod! Such a crazy feeling. 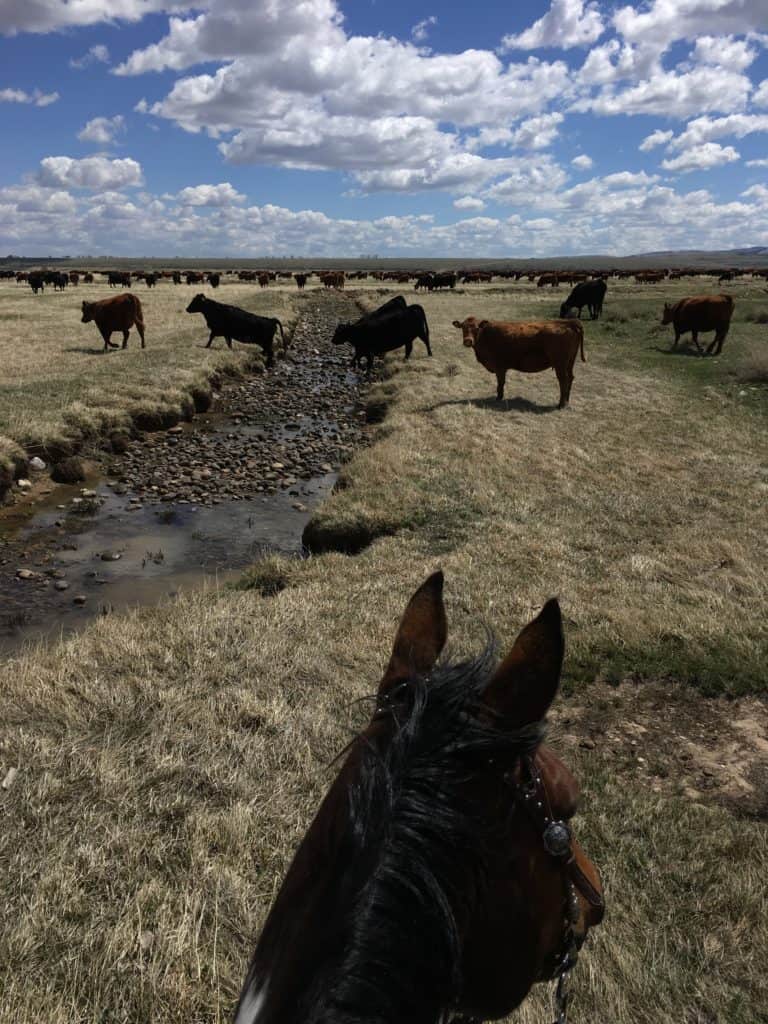 Two days later, when we moved the last few pairs, this creekbed was full of water!

Right back into that boggy spot!

Oh goodness. I told my husband I wasn’t going back in there – he had the dog, so I figured he could work them better than I could! And of course he went right through that spot without sinking in – he must have tricks I don’t… Hmm. Anyways, so I skirted the bog, shut a gate for Cliff, and then rode back to help Cliff finish moving them down to the gate. 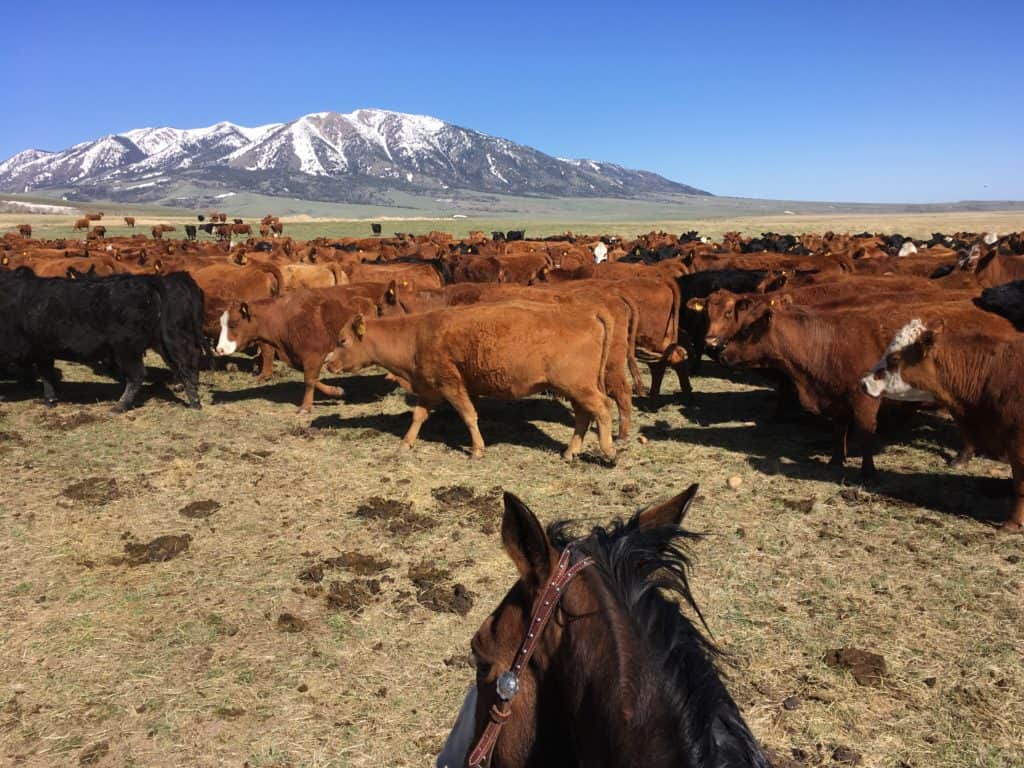 Getting them started out of the corner.

We had to gather another pasture, too, and move them all down the fence a bit. A couple of the babies were just born, and we left those mamas behind – no use trying to make the babies move so far when they are so little. A couple days later, Cliff and I went out again and moved those few pairs. By then the babies were stronger and kept up just fine.

So there you have it – an everyday story of moving heavies and pairs. Does it freak you out when your horse doesn’t have firm footing? Or am I unreasonably nervous? 😀 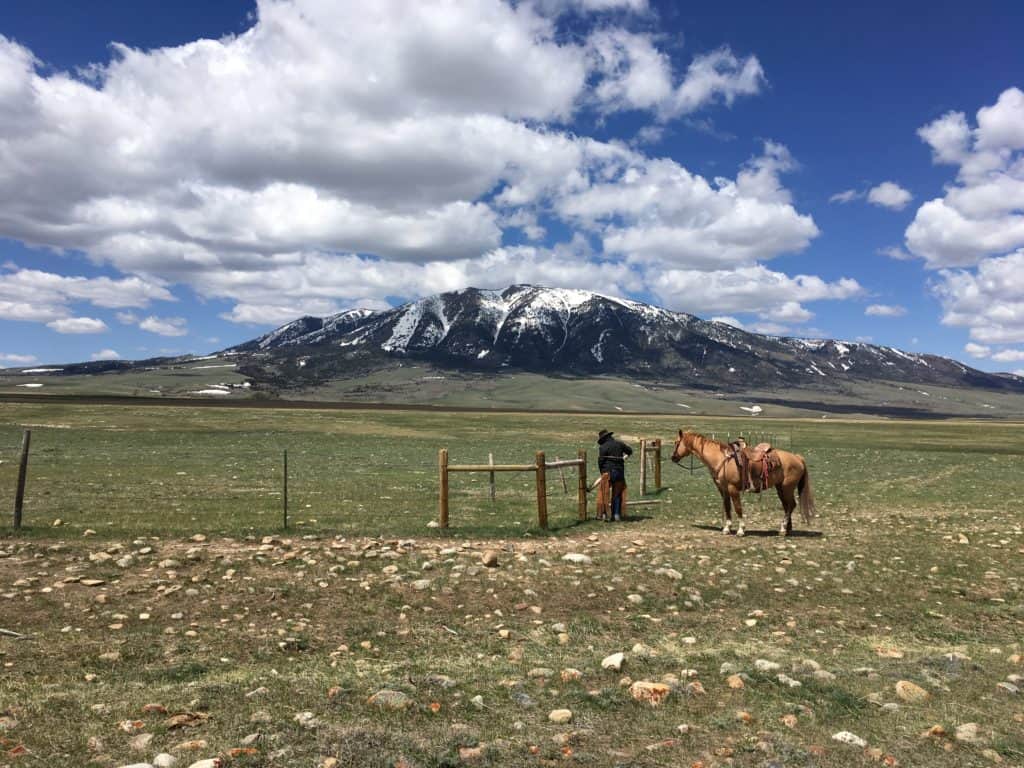