Home » Summer Branding at the Neighbors

It was still dark when the alarm sounded.

I didn’t hear it.

I was sound asleep – tired from being up late. I forgot to make a dessert to take to the branding, and it was bedtime till I remembered. So when the alarm sounded, I was too zonked out to even hear it. 🙂 Thankfully, my husband heard it and woke up.

The kids crawled groggily out of bed at 5:15, yawning and rubbing their eyes. The baby was stretched out so comfortably in sleep, that I hated to wake her. But I did. Because that’s what you do when you want to go to a branding. Meanwhile, My Cowboy was making hot, black coffee, and saddling his horse. When I finally got the kids all herded into the Suburban, we drove over to the barn and loaded the horse. 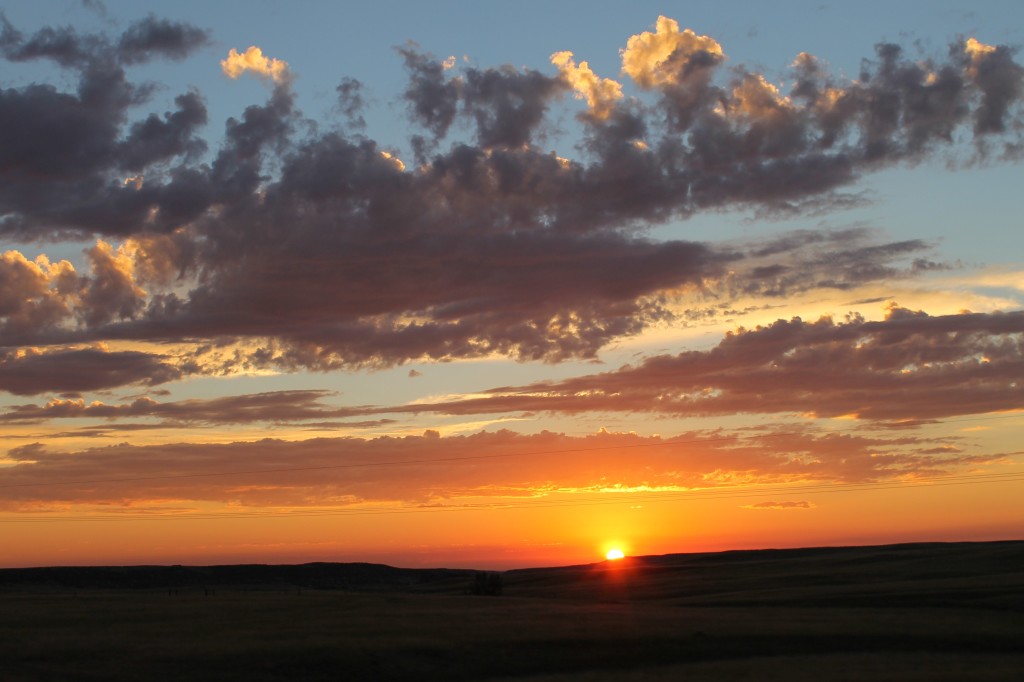 We headed north while the sun rose in glorious color beside us, streaming beams of light high into the sky, painting the clouds silver and orange and golden. 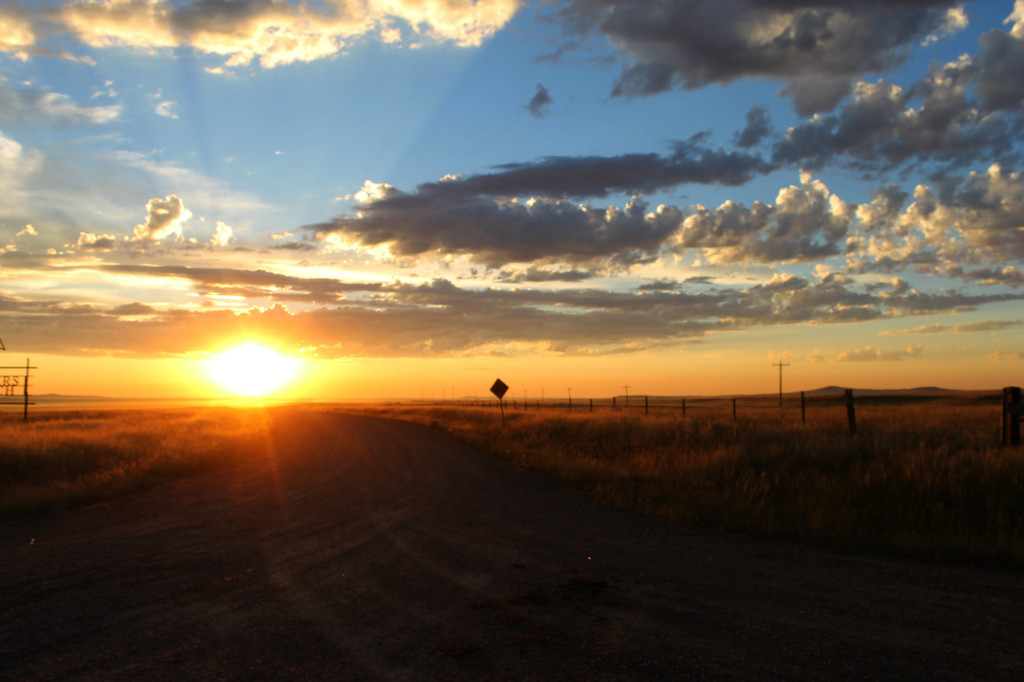 For just a few minutes, the sunshine lay a golden mantle over the land. The tall, prairie grasses glowed with light, and all the trees and hills had a soft, muted look that made you want to just sit and stare. 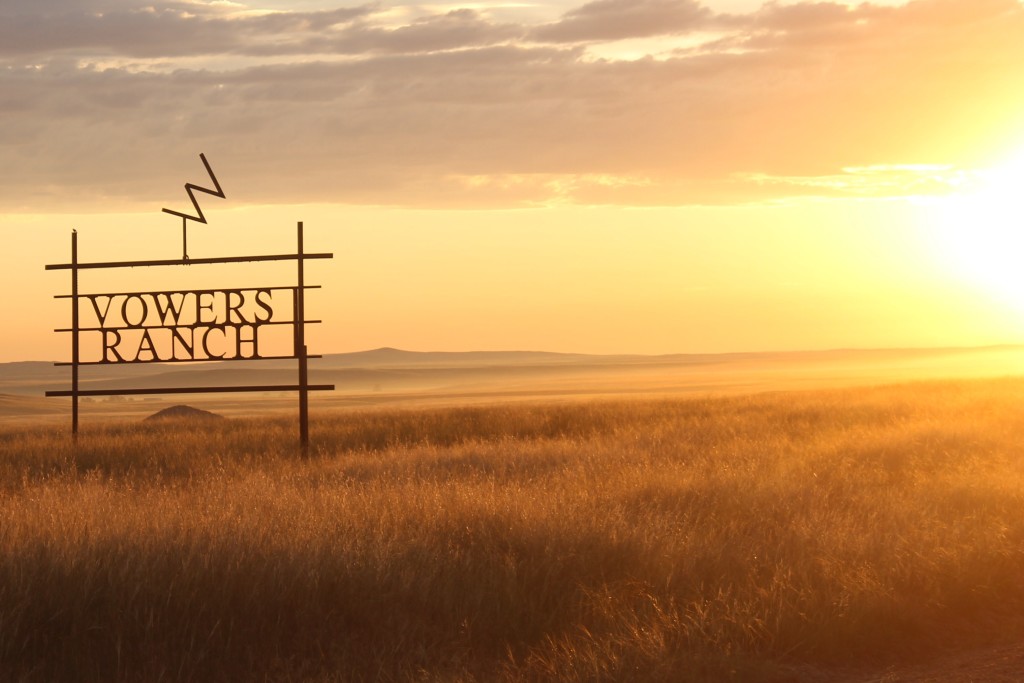 We drove back the two-track through miles of green grasses, with the birds swooping and darting beside us. There was fresh-cut hay in the fields, and a young elk – trying to figure out where to run to.

We arrived at the pasture where there was already a long row of ranch trucks, each one sporting a horse-trailer. We parked beside the last one and sat quietly while my cowboy unloaded his horse, and mounted up. After instructions from the Cowboss, he rode off with the others into the sunrise – over a grassy knoll, and they were gone. We sat in silence, still sleepy. 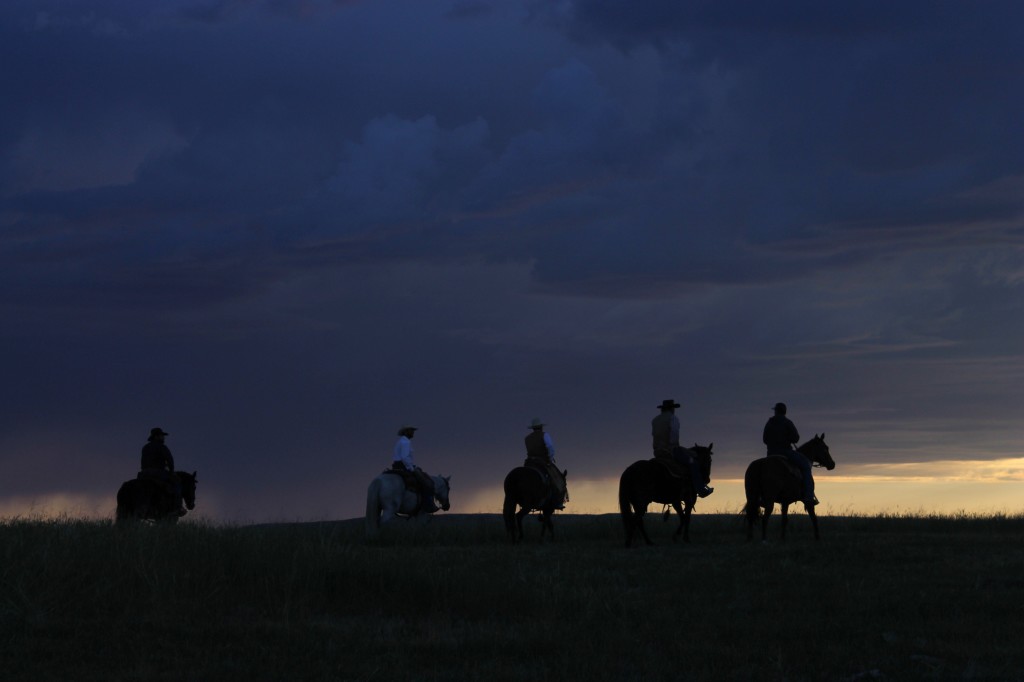 After an hour or so, we could see the cows drifting over the hills, followed by the cowboys. They had ridden to the back of the pasture, then worked their way to the center and front, pushing the cattle before them. 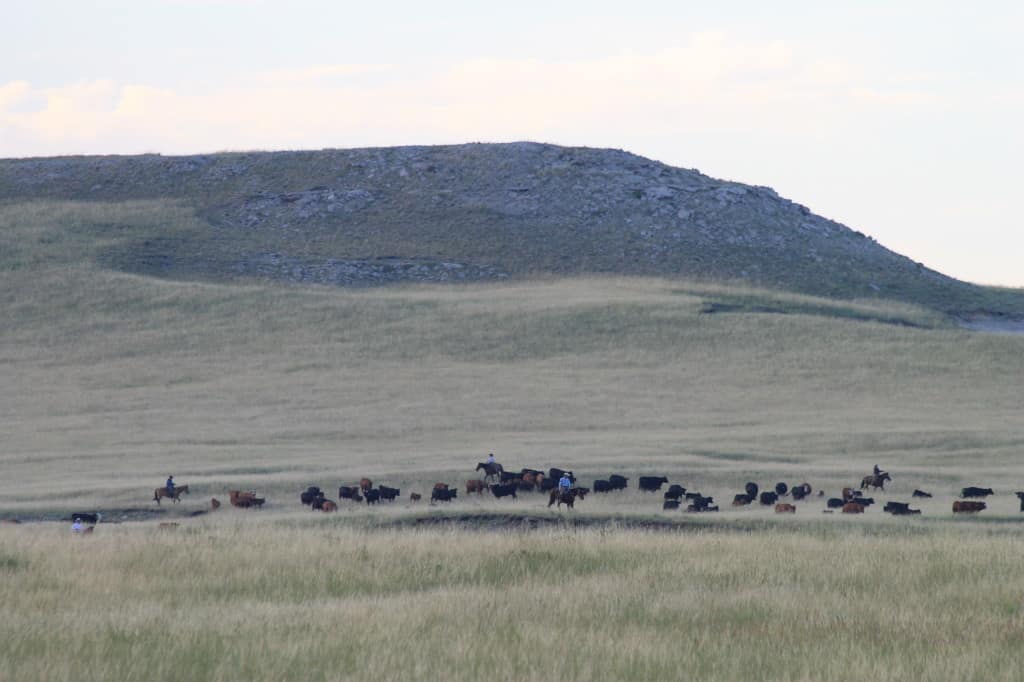 As the sun rose higher in the morning sky, the cattle got closer, and soon we could hear the mooing of the cows. The cowboys rode close behind them – close enough to keep them moving, but far enough back so that they wouldn’t start running. 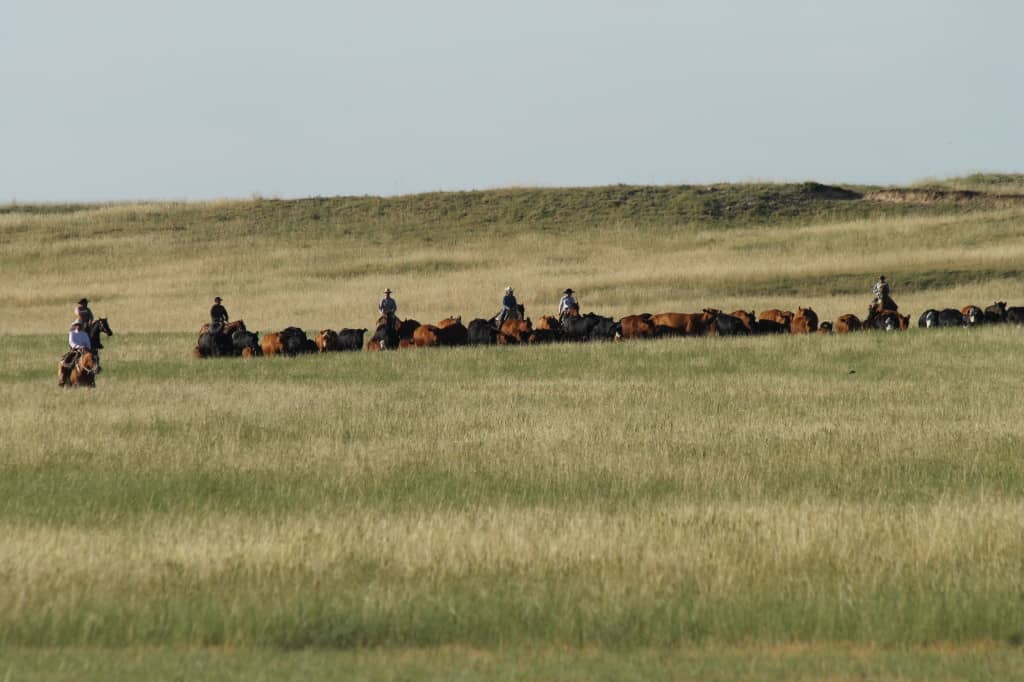 Once the cows were all in the branding trap*, the boss’s wife brought out some snacks for break. Huge cinnamon rolls and buckets of cookies and brownies. Plus the coolers full of ice-covered drinks.

Soon the pot was roaring, and the Cowboss had given instructions on how he wanted the roping to go. Some of the cowboys mounted up and started roping calves, while the rest of them stayed on the ground to wrestle calves, give vaccinations, castrate, and brand. They took turns, roping and working the ground. 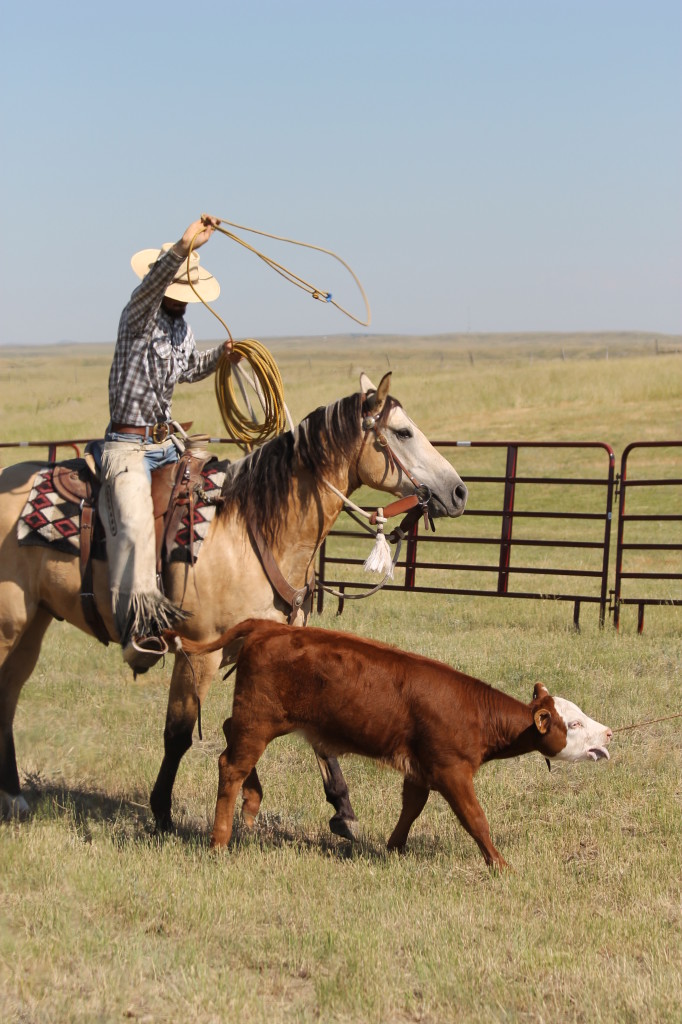 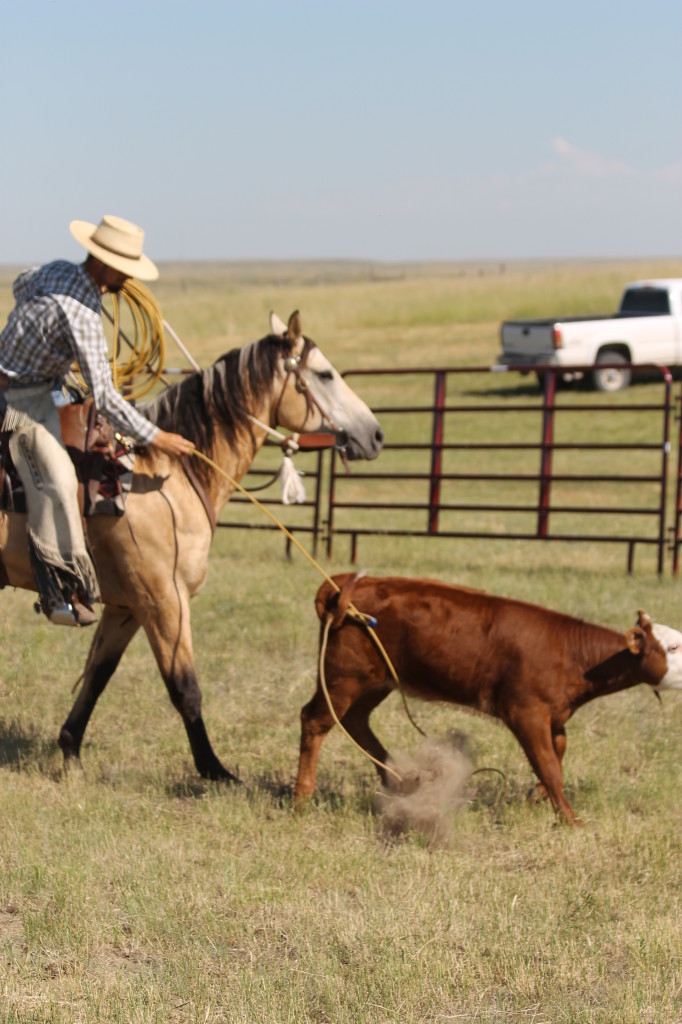 The kids were encouraged to git in there and help any way they could. For the littlest ones – like this tiny cowpoke – the best job is to mark the calf once it has had it’s vaccination. 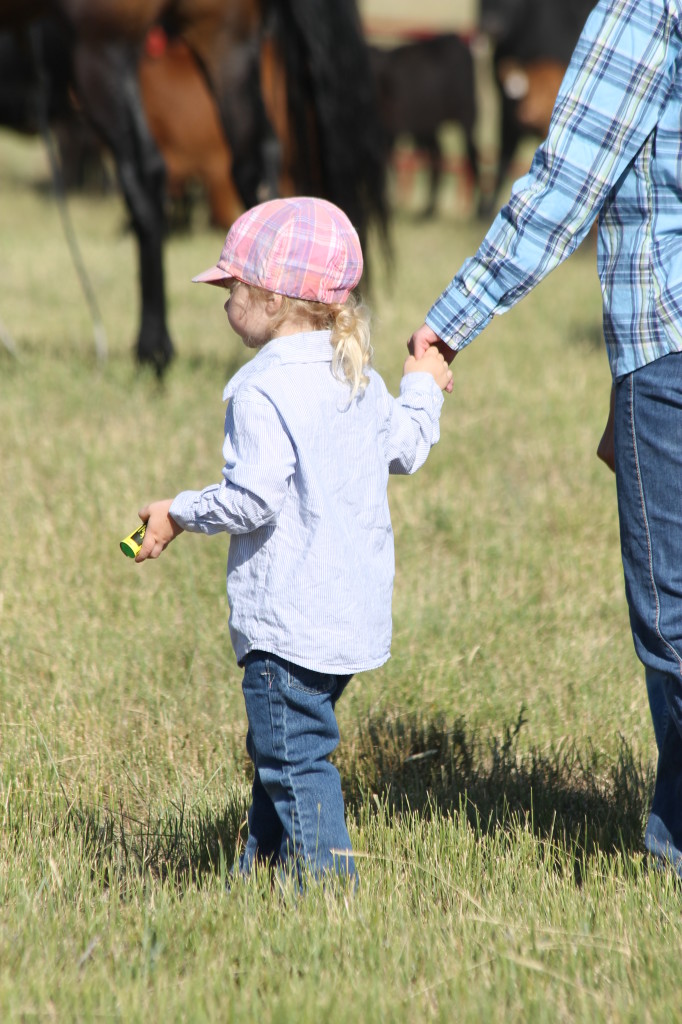 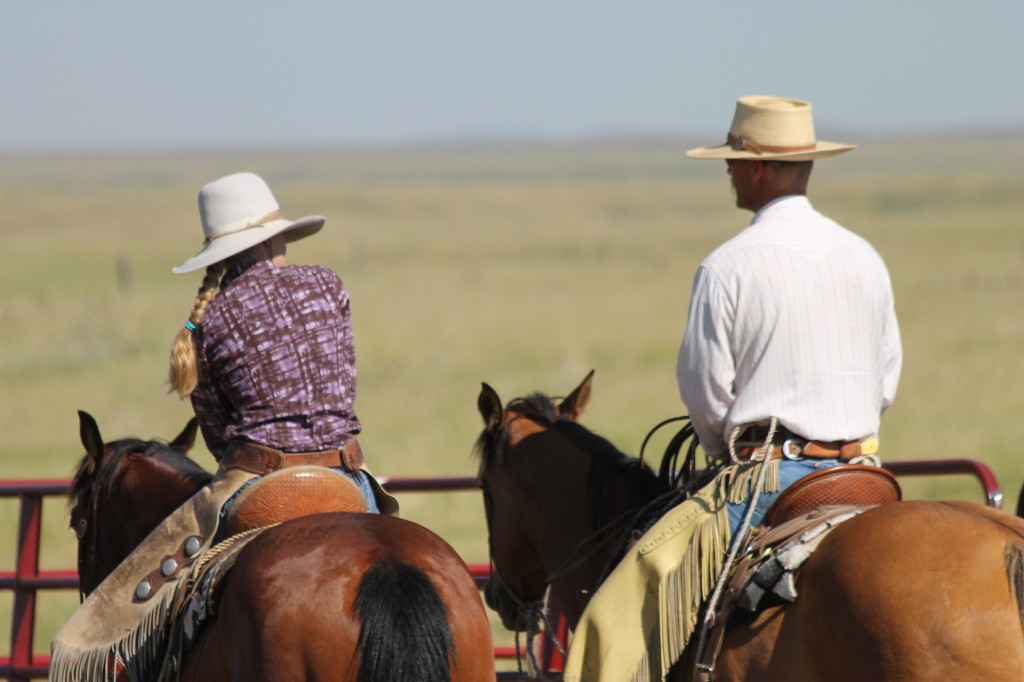 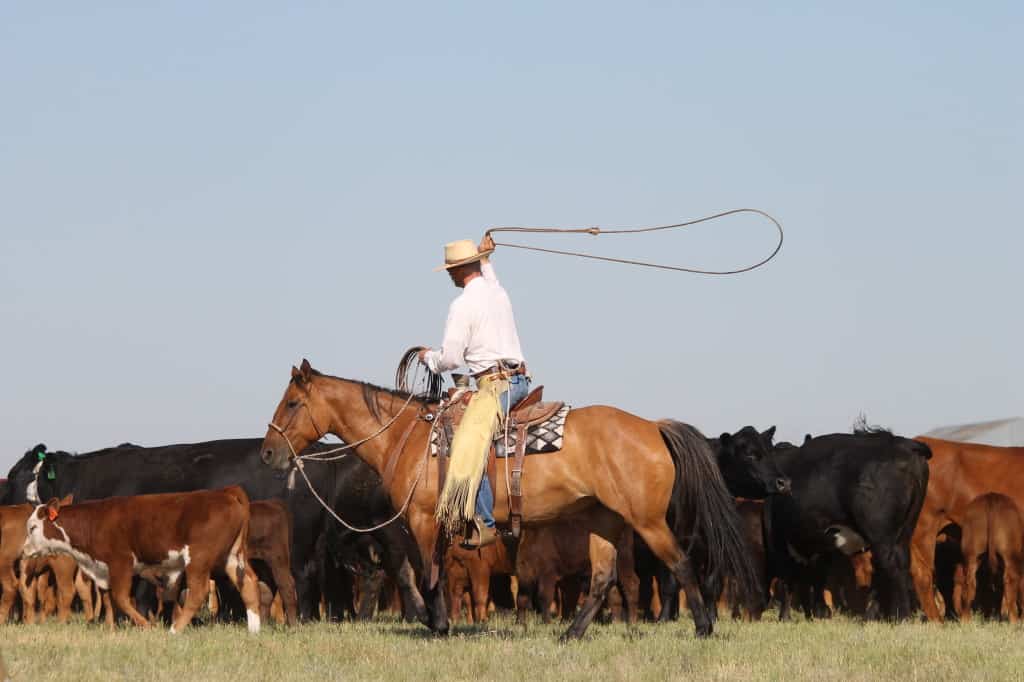 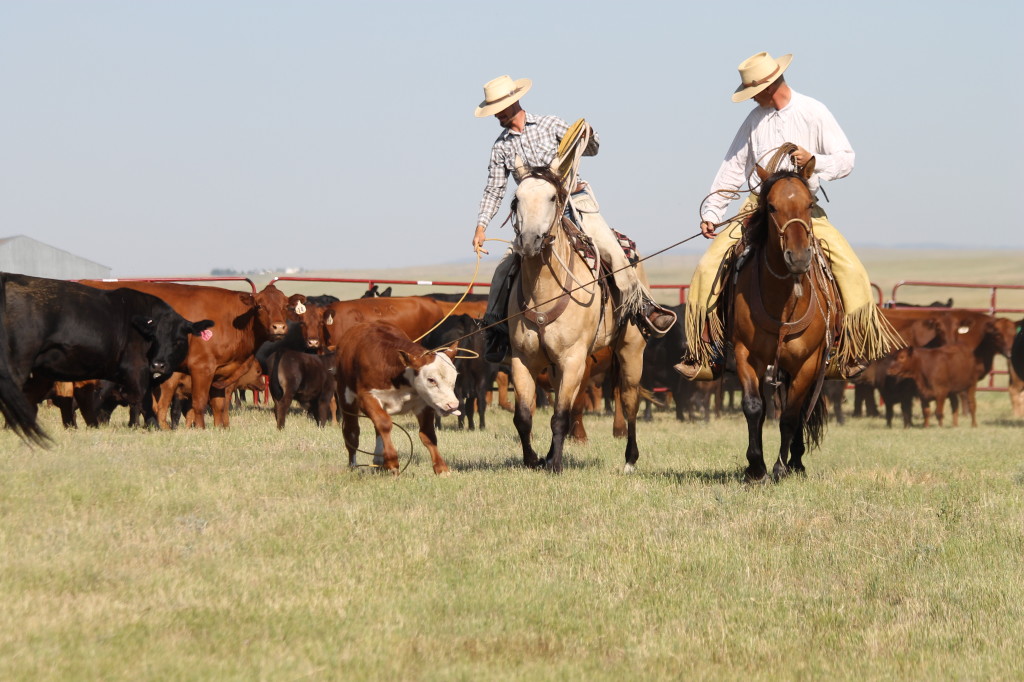 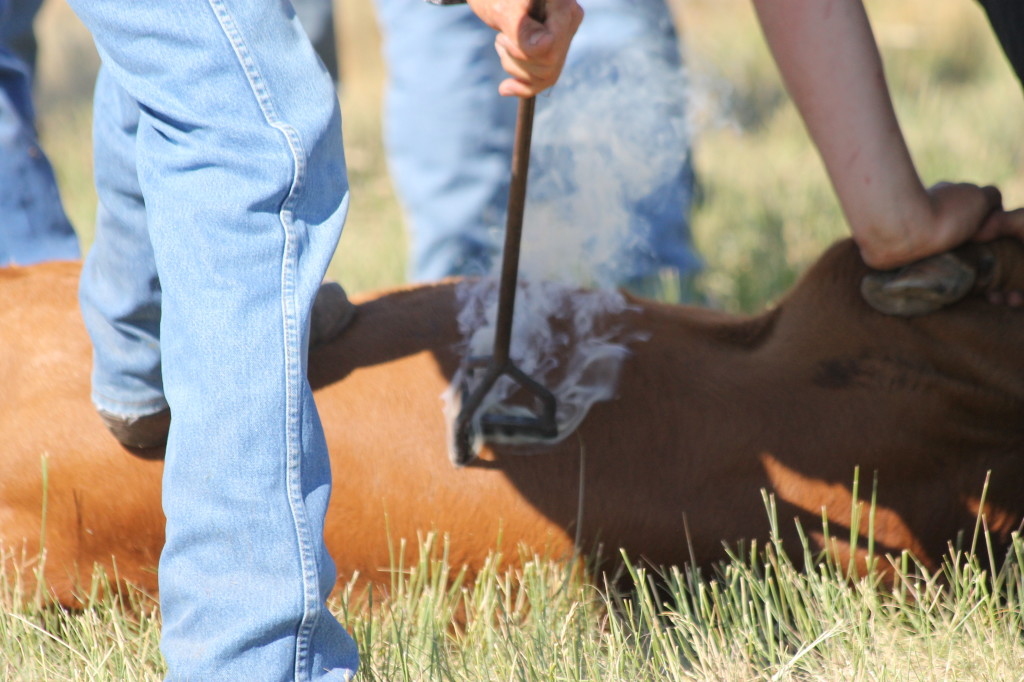 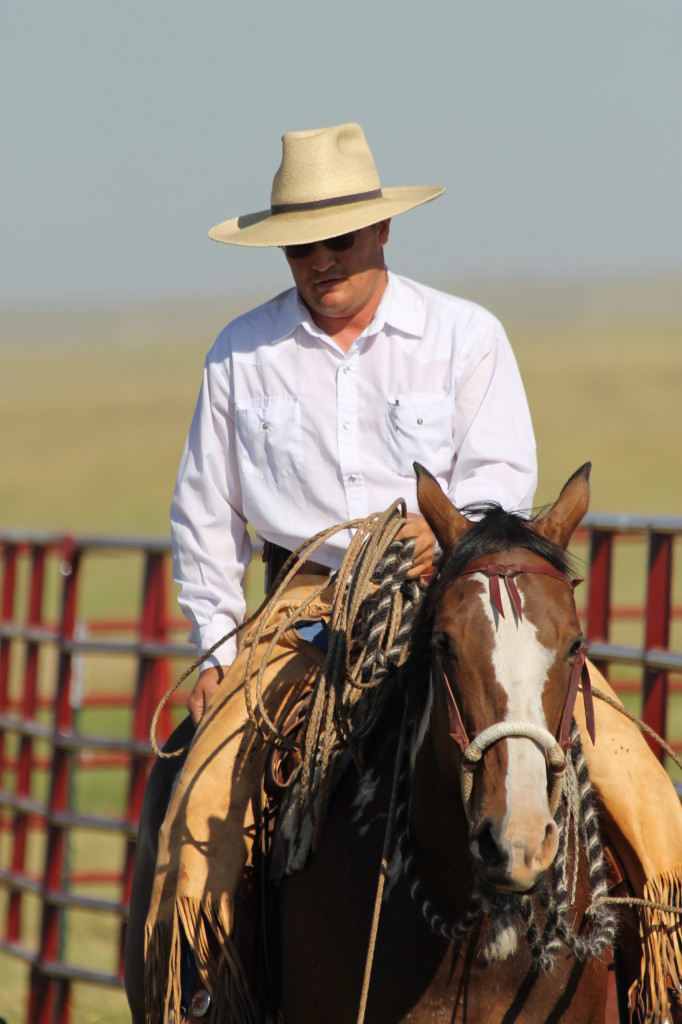 My favorite buckaroo in the whole world. 🙂 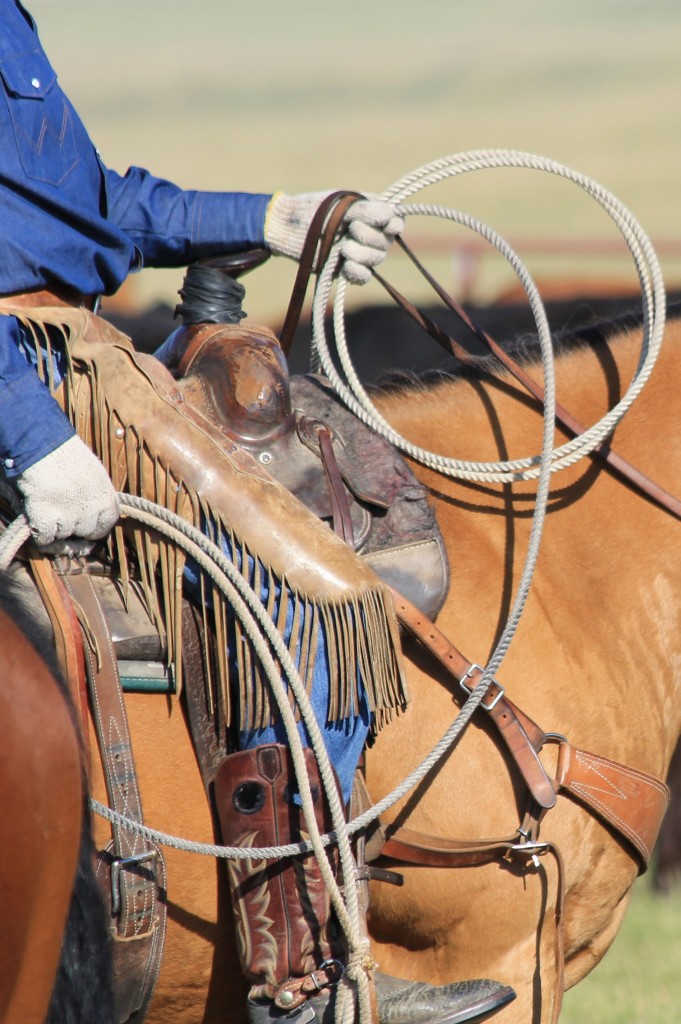 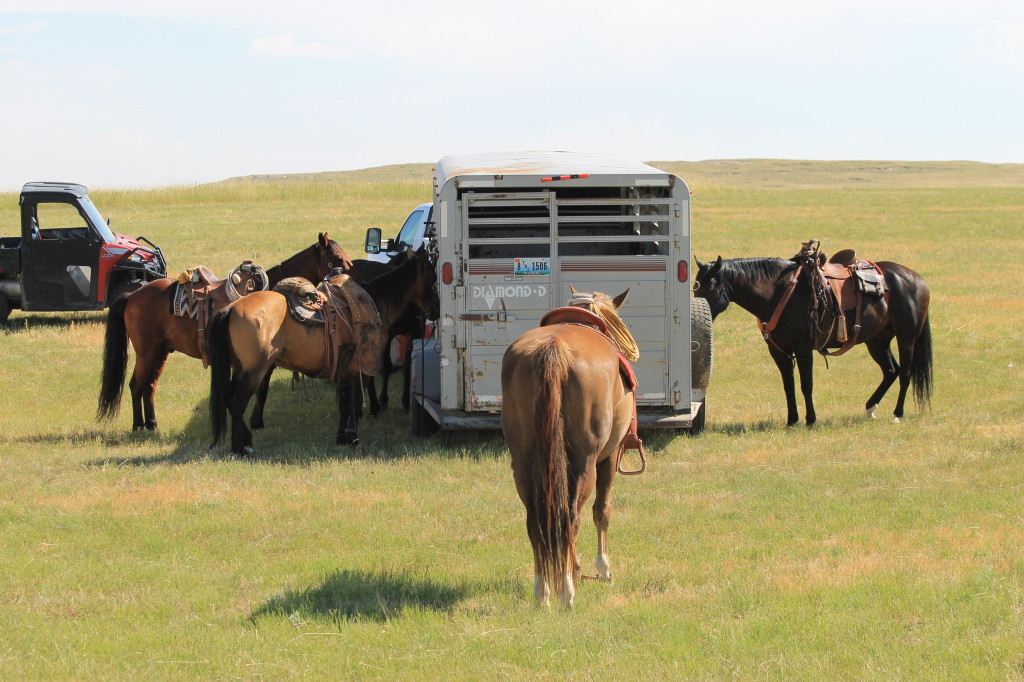 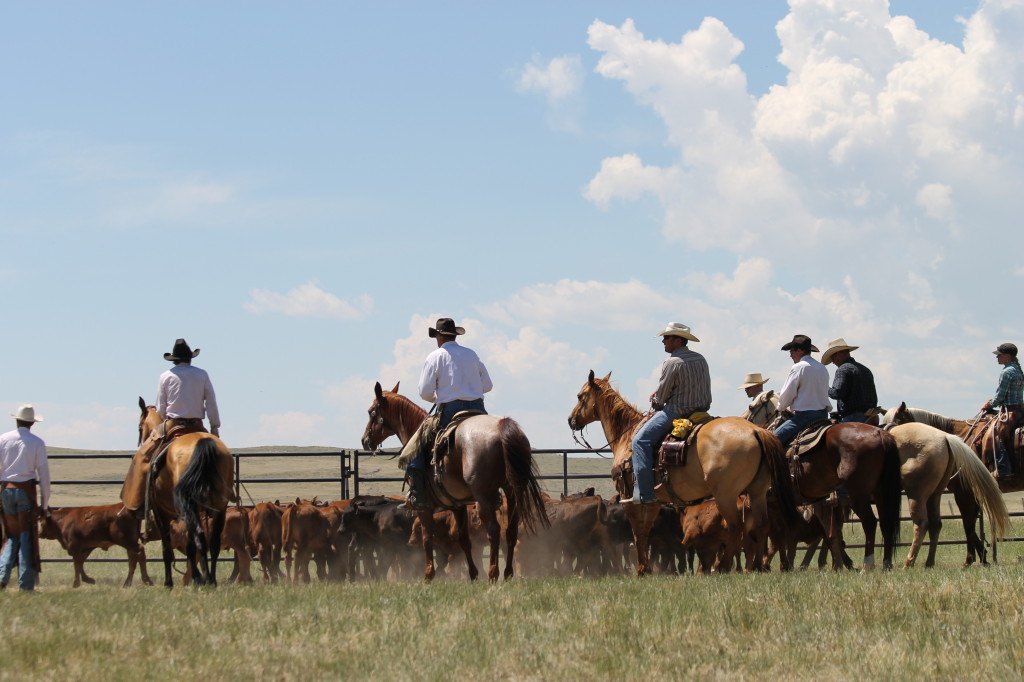 All done! Turning them out again. 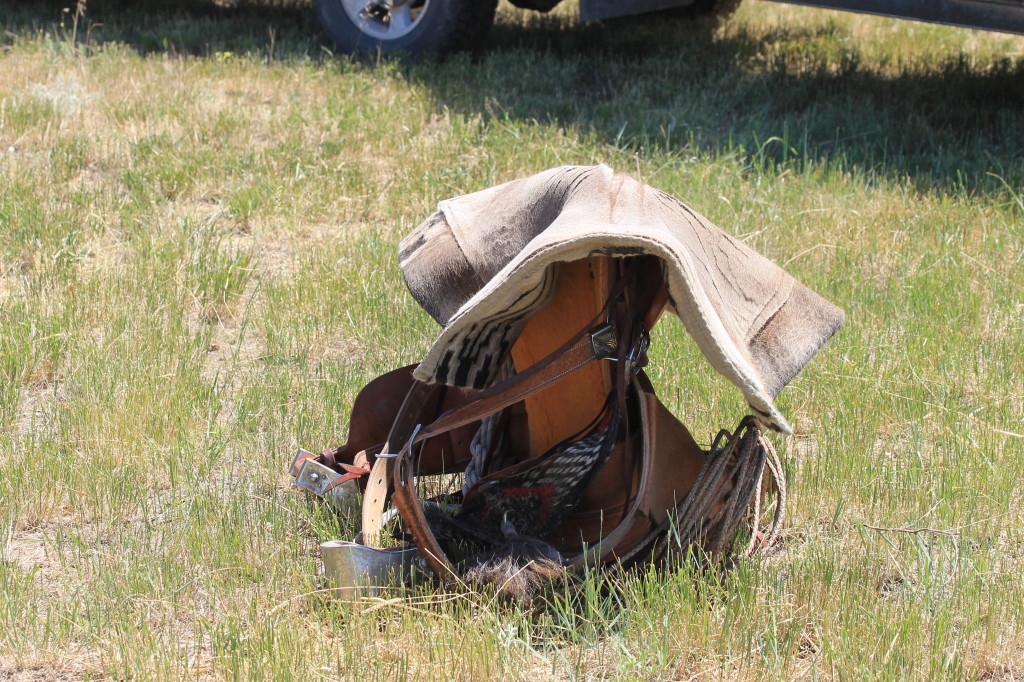 My husband’s saddle that he made. I made the cinch. 🙂 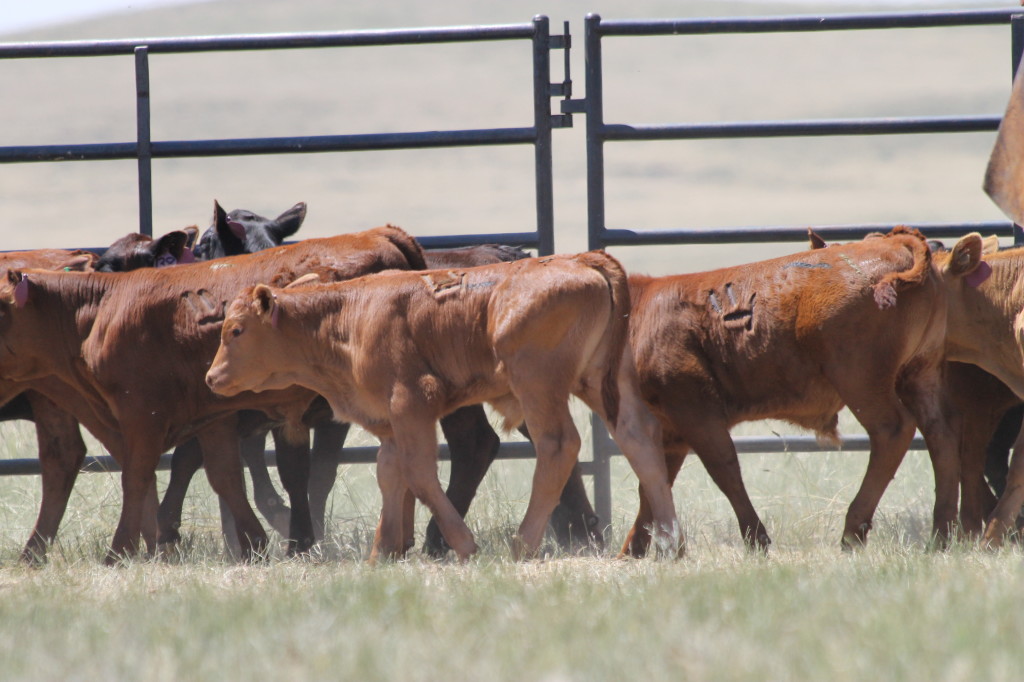 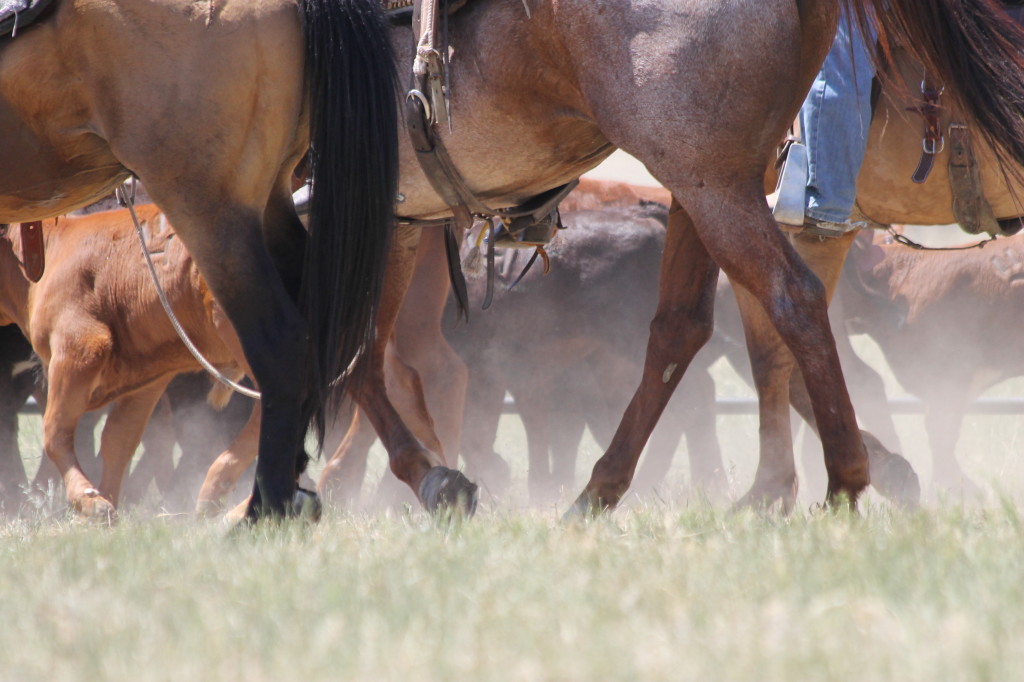 *Branding trap is the term used for a small fenced off pen out in a pasture, used primarily for brandings, so they don’t have to trail them all the way back to the corrals. Often they will set up a trap on the day of the branding – using steel fence panels kept for that purpose.

All photos are property of Kay Schrock.