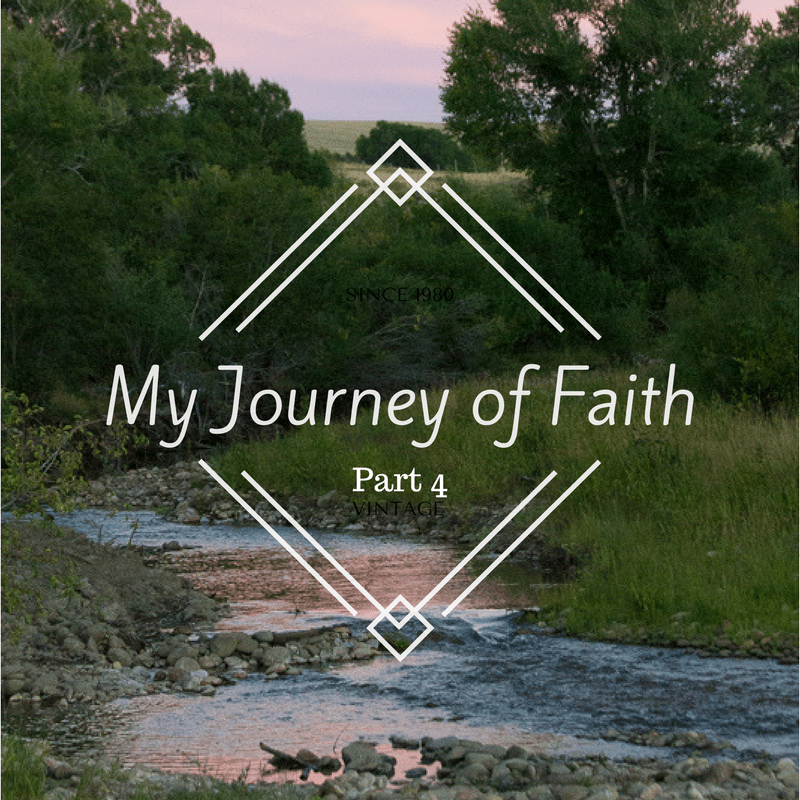 At last I had begun to see what a real relationship with Jesus was like! It started simply; by talking to Him throughout the day, about everything. I was purposely, consciously, training my mind to constantly turn to God during the day. To ‘set my mind on things above, not on things of this earth’. Colossians 3:2  I was not finished struggling against sin, but I was starting to see growth in several areas. I finally had hope. I had the promise of help and victory.

Day after day, I pored over the Bible and prayed earnestly for God to help me gain victory over my anger, selfishness, and discouragement. Up until now, the Bible had been quite dry and boring. It seemed almost sinful to admit that – and I wouldn’t have admitted it to anyone. But now! Now the Bible was like fresh, cool water on a parched desert. It came alive in my hands, and I feasted hungrily on the Bread of Life!

I don’t know if any of my family or friends could tell a difference. I’m sure Mom could – poor mom had to put up with me during my hard, temper-fraught years. As God changed my heart, I grew to respect and love my mom. I started trying to make life easier for her, instead of trying to get by with as little work as possible. I still flew off the handle at people, I still had a sharp tongue and a scornful attitude, often. But I saw these for the wicked sins they are, and began praying about them and fighting Self.

The next three years I attended the same Youth Conference. Each year I learned more about Jesus Christ, and more about how to walk by the Spirit, and not the flesh. Each year I came home determined to be a light and example to my friends, to help them see the wonderful new truths I was learning. But each year I came home and realized that we were not on the same wavelength, so to speak. The church I attended put a lot of focus on our Christian heritage, and a good moral life, but they didn’t have power! Or if they did, I never heard about it. Every Sunday it was the same testimony of struggling with the same old sins. They preached that Jesus would forgive your sins (and He will!) and that each day was a new beginning (and it is!) but I wanted more! I saw people who had real joy on their faces and testified of changed lives! That’s what I wanted.

So I kept on seeking, learning, reading. I also became disillusioned with the Mennonite culture in general. I loved my church – I really did! But they didn’t seem to be able to offer me much. And frankly all their rules and expectations were grating on me. Not that they were hard to keep; I had no problem keeping them. I never got into trouble with the leaders; I was a ‘good kid’. But the rules were not in Scripture, and the only thing they accomplished – as far as I could see – was burden people with unnecessary loads, and turn away those raised in a different culture. OR, they attracted people who saw it as some sort of ‘Laura Ingalls’ idyllic lifestyle. The reason given for the rules was to keep us from danger. To keep us from falling into sin. But there is a wonderful verse in Jude that says God can keep us from falling! How wonderful it is that anyone anywhere can be kept from falling by the power of the Holy Spirit within us! We don’t need to depend on man-made rules. (verse 24)

Of course, Mennonites are just like any other culture: There are wonderful people who love the Lord, and there are some who have wicked, unrepentant hearts. The problem I saw, was that if your heart was evil, you could still be a good Mennonite. You can hide heart stuff real easy when the church focuses on your appearance. Human beings are wonderful hypocrites. We are all pros at putting up a front! I include myself in this, by the way.

In 1998, my oldest brother died, about a week or two after Youth Conference. I was devastated. It was my first taste of death. But God ministered to my heart in such a special way, that it became a cornerstone for my Christian life. Ever since, I look back and remember how loved I felt at that dark time. You can read about that experience here: This Day in my History.

Well, when I was 18, my family took a 3 month visit to Belize, a small country in Central America. To give a bit of history, my mom is related to some Mennonite missionaries that run several missions in the southern part of the country. When my parents were younger, they went several times to the mission to help  while the missionaries were on furlough in the States. The last time they went, I was 4 years old. I had vague memories, and my sister – who was 6 that time – she also had a few memories. But we wanted to go again and see the mission as adults. My dream was to be a missionary like Amy Carmicheal, so I think my dad was trying to give us a mission experience without us leaving him to get it! 😀 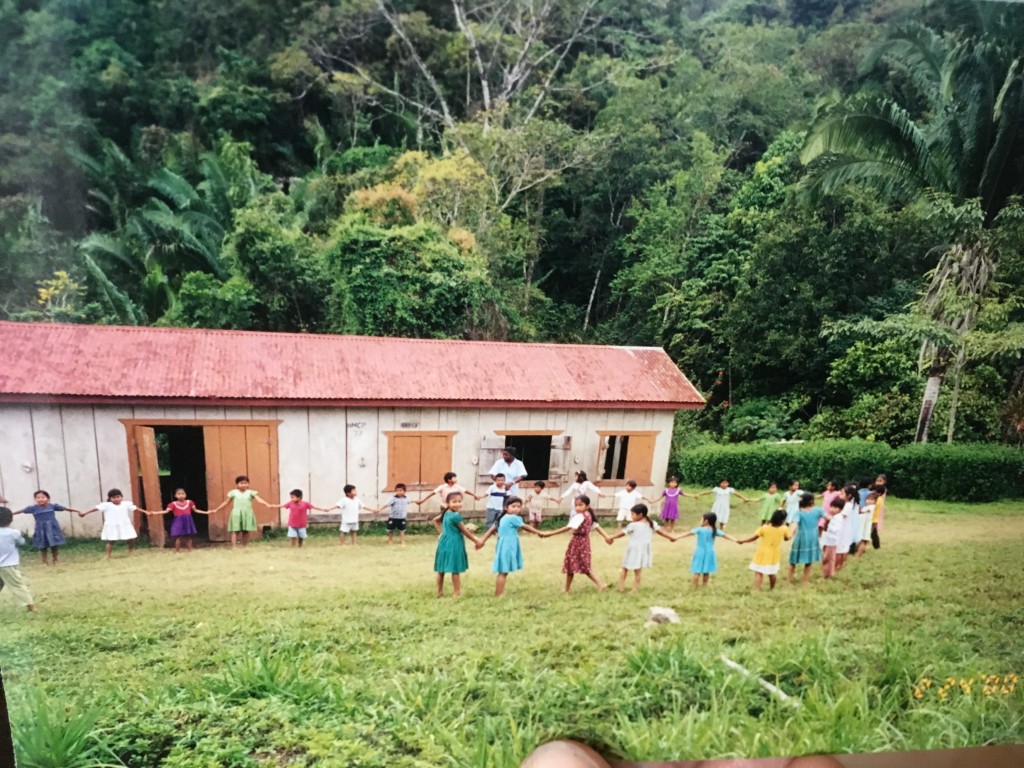 A village school in Belize.

Our family planned to road trip through Mexico to Belize, and there was this friend of the family who decided he wanted to go along. He’d spent almost a year at the same mission doing volunteer work, and had friends down there. So one cold January day, we headed to Belize.

What does this all have to do with my faith? Well, two things. 1. It opened my eyes to the problems that come when you try to impose Mennonite culture on 3rd world natives. (doesn’t work very well) and 2. That family friend who went along, asked me to marry him! 😀 Yes, it was Cliff, and it was in that hot, tropical country that we started dating. And we started dating because one day we had a long talk about Christianity, churches, and our longings for a church that taught more. We both had the same longings and desires, spiritually, and we were both kind of unsure where we wanted to be.

When we went home 3 months later, my church was going through a major church split. Caught up in my new romance, I never did get all the details, and I really didn’t care. I had been wanting to leave the Mennonite church, and here was the perfect opportunity. I gave a letter of withdrawing my membership, and, considering the confusion that church was in at the time, I guess it didn’t get much attention. I didn’t go to church the Sunday it was read publicly, so I don’t really know how that went down. But anyways. I want to say again how much I loved my church. It was real hard for me to leave it. I had close friends there who had poured time into my life. Friends who I am still indebted to, and whom I respect. But it just wasn’t meeting my deep heart cry for life and growth. 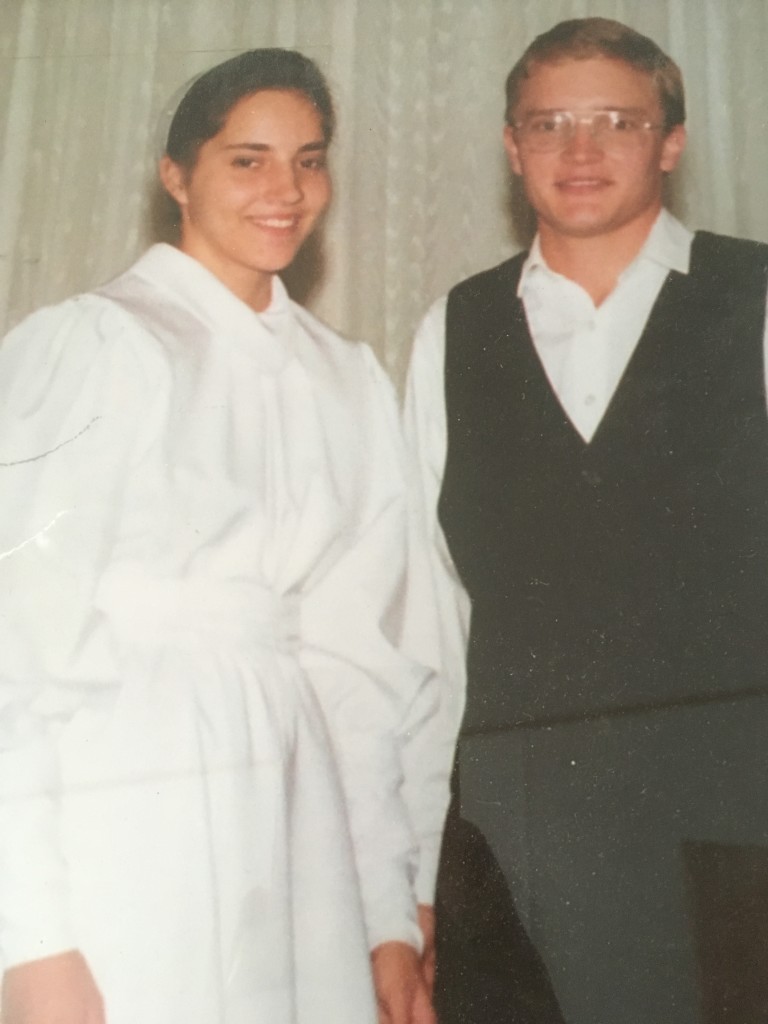 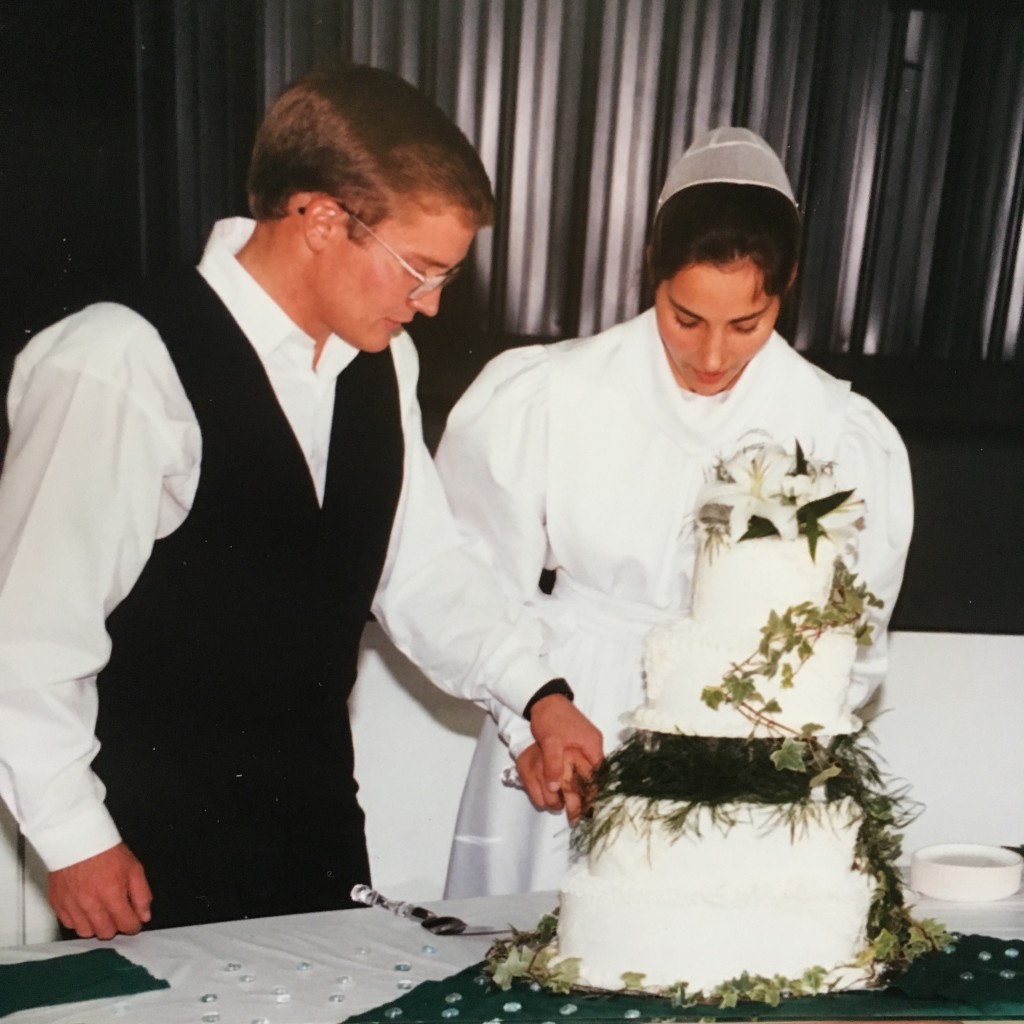 At our wedding reception.

Cliff and I got married in November. (can you hear the happy church bells pealing? 😉 ) And we honored my mother by having a traditional Mennonite wedding. But when we got back from our Arizona honeymoon, we began attending a little non-denominational church. Most of the members were former Mennonites, so we felt comfortable, yet it had some life that we had been missing. We attended that small church for a few months, then  circumstances forced us to move in with my in-laws several hours away. We started attending their small church and eventually moved there. 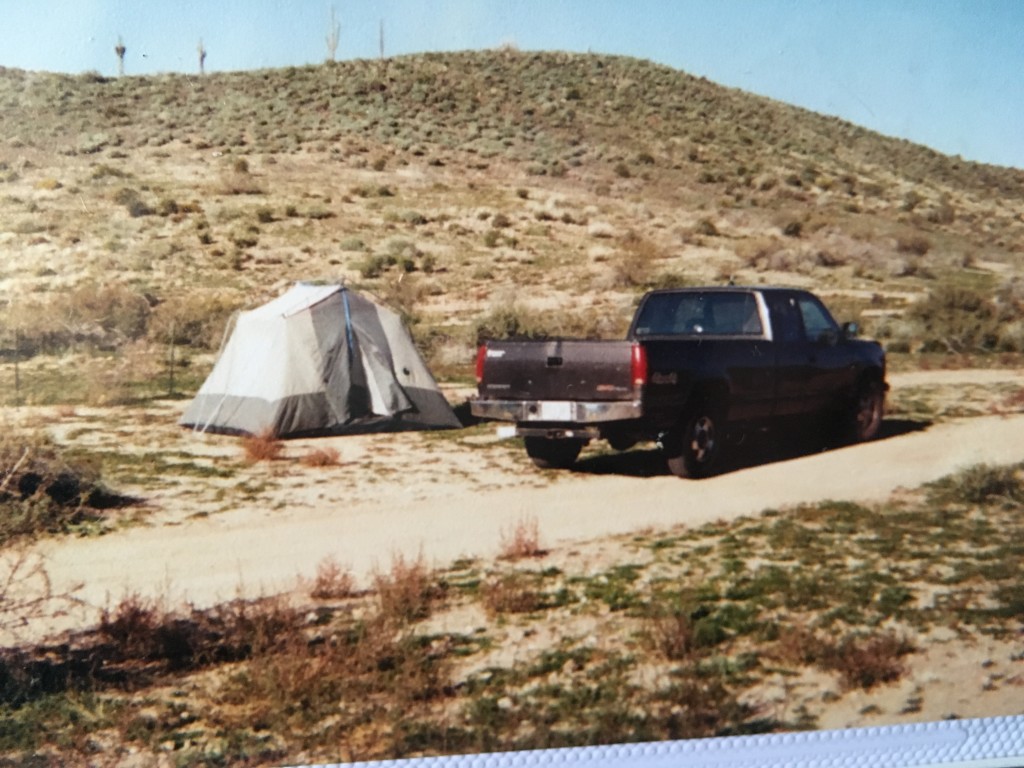 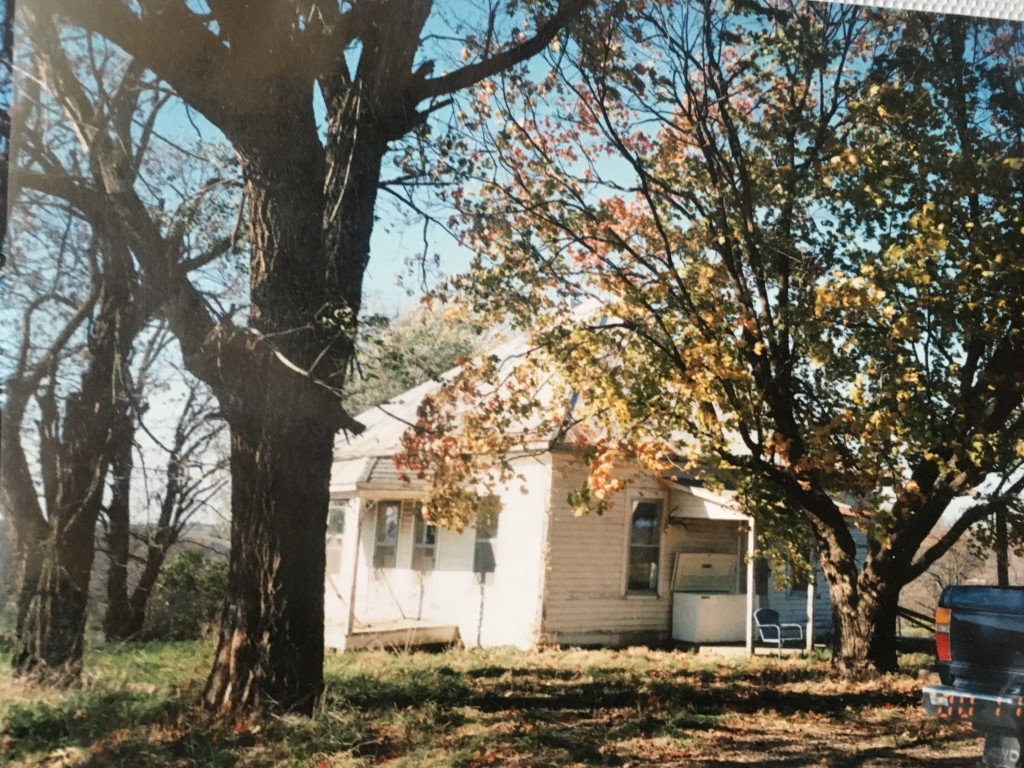 I want to share another major, life-changing truth that I learned there; next time!

Read part 5 in the series HERE.