Home » Left behind in the brush… tales from a mom learning to cowboy.

The heifers had to cross that river, whether they wanted to or not. We kept our horses close behind the cattle as they milled reluctantly by the edge of the Medicine Bow River. It was swollen with spring runoff. The swirling water was murky, and the heifers had no interest in stepping into the water when they couldn’t see the bottom. 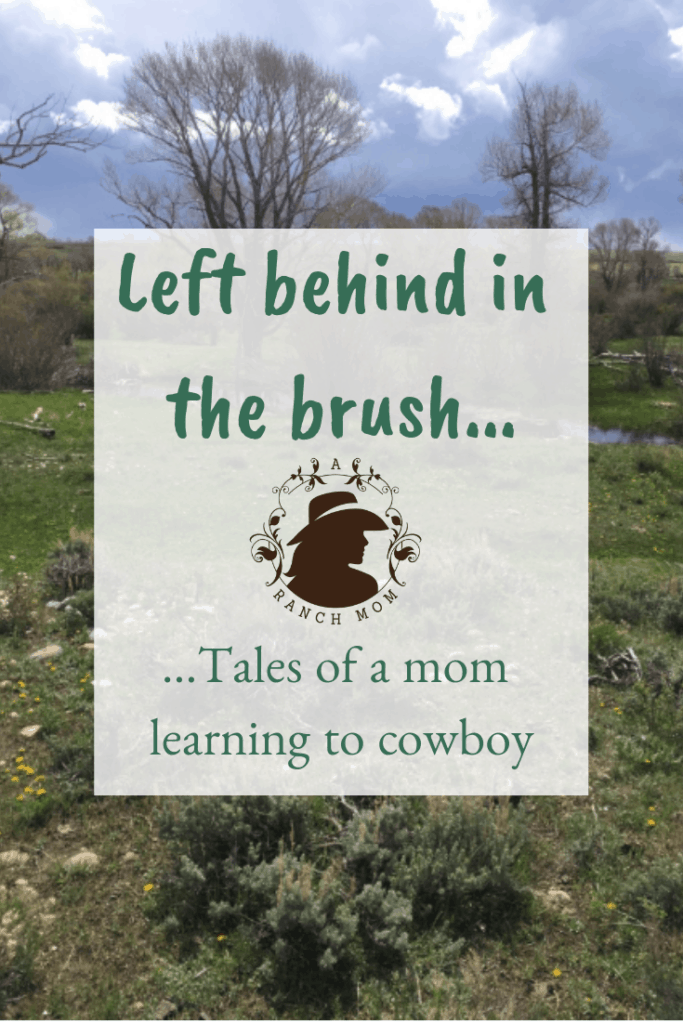 I was told to lead them across the bridge, but when the first heifers arrived at the bridge, and I walked my horse out across it, they had just looked at me and turned tail. (it rarely works to lead cattle unless one has feed or hay for them to follow, but we’d thought it was worth a try) I had to go back and help herd them back to the river’s edge. The four of us now surrounded the jittery heifers, waiting, giving them time to relax and start across.

One heifer started tentatively across the bridge, and several more followed. One of the cowboys rushed up behind them, adding his voice and energy to keep them going. But the sound of their own hooves on the wooden bridge startled the cattle, and they turned as one and made a wild rush back to the side they were from. 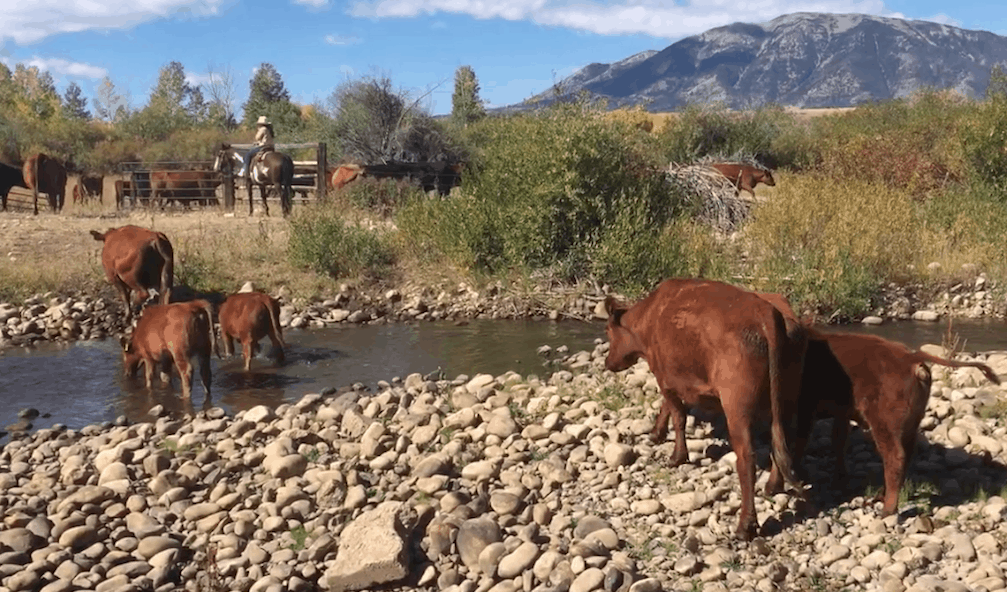 Same river, later in the year after the water levels went down. When this story took place, all the rocks were well underwater.

At the other end of the bunch, one of the cowboys urged a heifer out into the rushing water. It got halfway out and panicked. It turned and struggled back to the riverbank, then dodged the horses and ran off through the brush. Two cowboys ran after her, brush cracking and hooves pounding the damp ground. Soon the heifer came crashing back out to the river’s edge and joined her nervous companions.

We stood still for a minute, considering how to get the critters across the river. It wasn’t that deep, but the muddy rushing state of it had the heifers scared to enter. They refused to cross the wide bridge. Finally, one cowboy necked a heifer and rode out into the river. Belly deep, the heifer came plunging behind, unwilling – but unable to resist.

As the lead heifer was drug across, the rest of us whooped and whistled and put pressure on the remaining cattle. Seeing their companion cross the river, the others soon followed in one wild, splashing, frenzied rush. One of the dogs dashed into the melee, no doubt wanting to help, but instead, he just got in front of the heifers and some of them stopped and put their heads down to look at him.

“GET OUT OF THERE!!” his owner bellowed, and finally they got the confused heifers past the dog and headed towards the middle of the river. In a minute, they were all on the far side of the river, and off like a flash.

They left that river at a top run and headed down the two-track. The cowboys followed on their heels, the dogs running alongside so fast it looked like their feet barely touched the ground.  I came along last, the heifers frantic dash having taken me by surprise.

When the cattle reached a bend in the trail, they didn’t even pause but crashed straight on into the thick willows, the cowboys in hot pursuit! I was still in the back, just trying to keep up. I followed one of the cowboys as closely as I could, knowing that I was useless at this point, but just trying to stay with them. 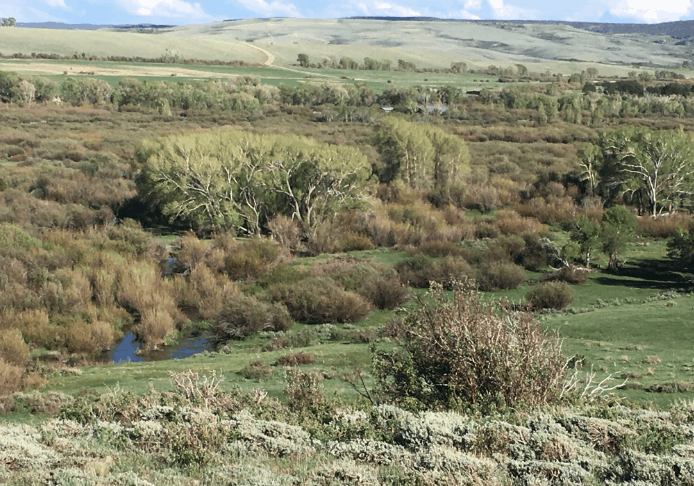 The river bottoms where we were moving cattle.

We came to a big thicket of willows, he went one way and I went the other. I came around the thicket and my horse stopped so fast I jolted forward. There was a side tributary of the river flowing through here, and I didn’t know how deep it was, or if it was solid to walk through. This was my first time riding the river bottom, and I knew sometimes water was a lot deeper than it appeared. I just didn’t know.

I turned my horse and went the other way around the thicket, I had heard the other cowboy splashing through the water so I knew it was solid there. We splashed and jumped through, but by now I was left behind. Everyone was gone; cattle, cowboys, dogs and all. I couldn’t even hear them, and that mystified me because they had been sending up such a racket that you’d think they’d be heard from a mile away!

I rode on, but there was a maze of creeks and thickets and I had no idea where everyone was. I didn’t know if they were still going, or had turned, or what. I finally decided my best bet would be to trot back out to the trail and take it up towards the gate. Then at least, I’d see them as they went through the gate. and could catch up! 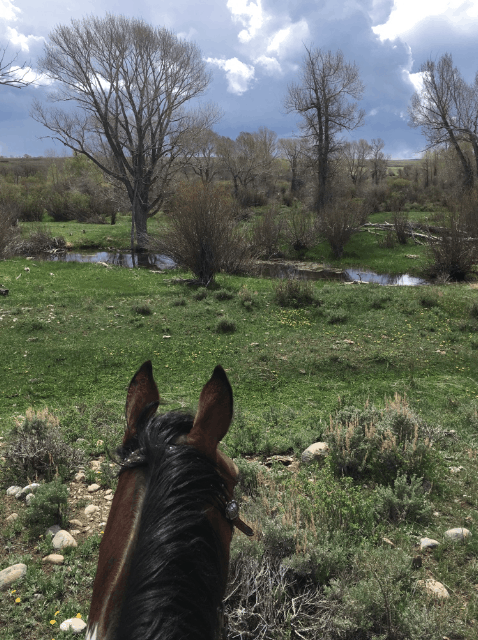 I took this photo while waiting on the guys.

I went to the gate but all was quiet. Bird called and the wind rustled the new spring leaves, but not a sound or trace of the cattle and horses. I thought maybe they beat me to the gate, so I waited, thinking that they were just settling the cattle. After 45 minutes, I gave up and trotted home.

I unsaddled, and put my horse out. I decided that from now on, I would make sure I knew the entire plan before riding out. When your husband says: “We just have to move this small bunch down to the neighbor’s pasture – wanna help?”, it might be turn out to be a half day’s endeavor, rather than the couple hours you expected! And a girl’s gotta look out for herself when she is the only one working with a crew of experienced cowboys! 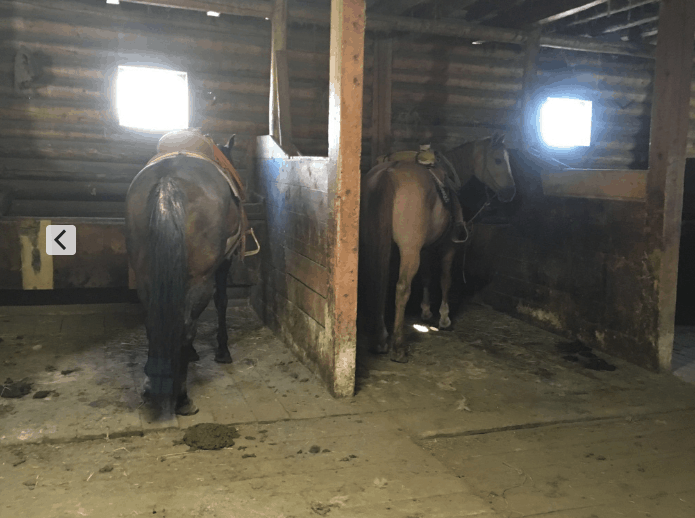 I later learned that the heifers had run pell-mell all the way to the gate, crossed through and kept running nearly the whole way to the final pasture, which was, in fact, several miles from where I thought it was. The cowboys never thought to tell me where the new pasture was, in fact, I’m pretty sure they never even missed me. 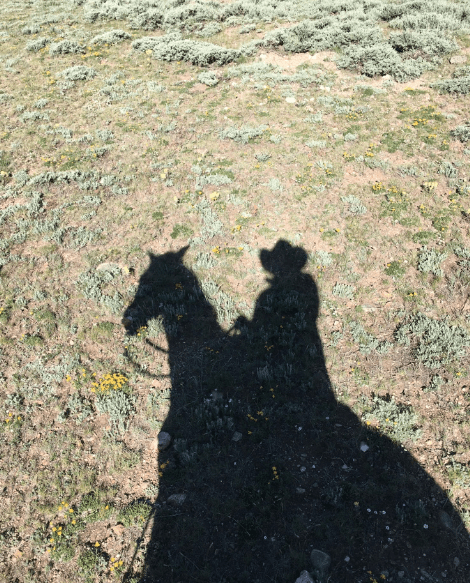