Off The Ropes.
Ideally, a cowboy will take a young horse and train it carefully, working and working to get it just how he likes it. Cowboys and buckaroos put a lot of time and effort into producing a horse that is well-trained and helps them do their job easier.
But sometimes when they are on a big outfit, they have to ride horses from the ranch’s herd. In most cases, they aren’t trained to a T, often being turned out for a season without being ridden, having many different cowboys come and go – each one using slightly different methods of training… it can make horses that can work, but often have quirks and bad habits. This event was trying to simulate that experience – the horses were all real ranch horses, and the cowboys were able to talk with the owner about the bad habits that each horse had developed.
Just like the first day riding a new horse pulled out of the remuda – they had to get on, and go doctor cattle, despite the issues that the horse may have. They just need to get the job done.
Horse-whispering is fine, when you have time. But when there’s a job to be done – you don’t have the luxury of time.
So, here is the highlights of the ‘Off The Ropes’ event. 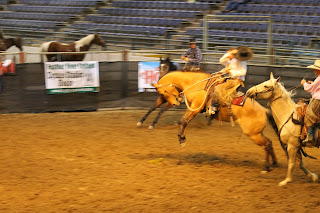 This was my favorite rider. He was laughing the whole time, fanning the horse, and on top of that – he was probably not in his 20’s anymore! One tough old cowboy. 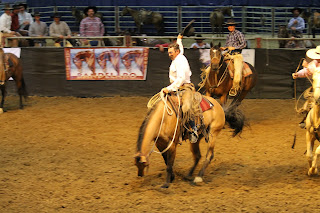 He went from this, 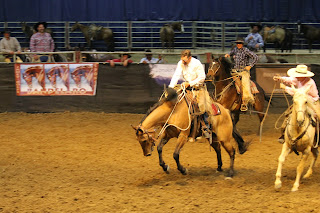 To this. In a matter of a few minutes. Gettin’ the job done. 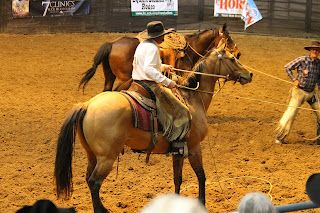 Then there was this fellow. He didn’t even get on his horse, before it blew up. 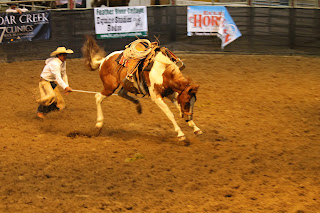 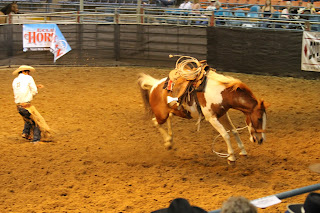 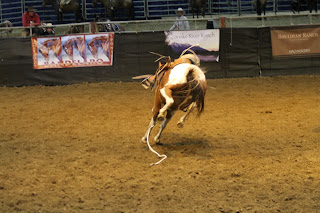 There was a lot of fast action here, boys. I thought for a minute that the horse would go right on over on top of him. But it didn’t, thankfully. 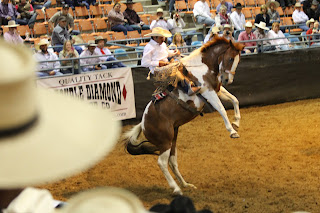 This was the only event that was this fast. And wow! It was fast! He lost his hat somewhere… 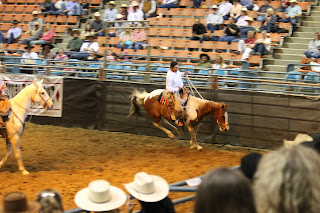 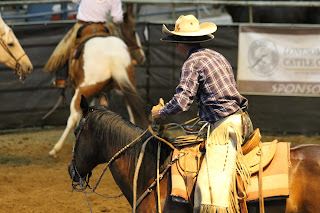 Here he is a few minutes later. 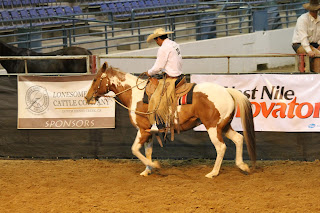 Roping with the same horse that didn’t want him on his back a bit earlier. 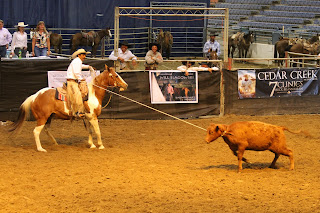 These, my friends, are real cowboys. They aren’t just trying to hang on for 8 seconds. They have to get the horse under control and get to work. They are real artists. Whether they come from Texas, New Mexico, Nevada, Wyoming, or Utah. They know horses, they know cattle, and they know how to work both in a manner best for both. And themselves, of course. 🙂