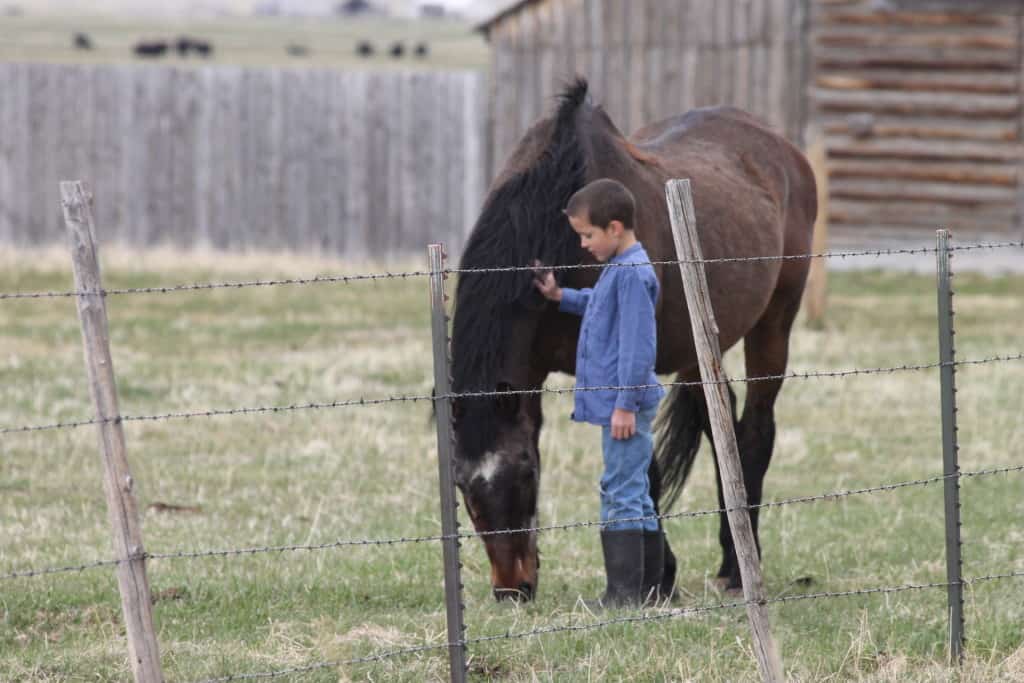 My son with the first kids’ horse we owned.

The summer heat wrapped thickly around me, causing sweat to run in little rivulets down my back. I heaved the saddle up on my horse, tightened the cinch, and checked to make sure nothing was twisted or pinching. It was an old saddle, dark with age, and the skirts were curling under. I didn’t care, I had a horse and a saddle to go with it – little things like a poor quality saddle and cheap farm-store headstall meant nothing to me. I eased the bit into Sonny’s mouth, and swung up.

We were leaving Illinois for the summer – going away for work – and our friends said they would keep my horse for me. We didn’t have a horse-trailer, and my dad didn’t want to go to the bother of borrowing or renting one. He said it would be easier if I would just ride the horse over, and Mom would come pick me up.

Easier for him, anyways.

I started off briskly. Sonny always started off briskly. He jumped smartly over the deep ditch by our yard, and I liked the little thrill of jumping. He walked up the first hill quickly, head up, ears pricked. I watched the birds darting, and daydreamed about being a true horsewoman who worked with horses all day – riding, maybe racing…

But the further we went, the slower Sonny walked. He was nearing 30 years of age, which is ‘old-folks’-home’-age in human years. He still got around good, not much arthritis or other problems, but in the manner common to old folk, he was increasingly stubborn and balky. He didn’t care much about making you happy – he just wanted to be left alone to eat his grass and switch at flies, without having some kid pile on and make him walk in the 100-degree heat for miles. 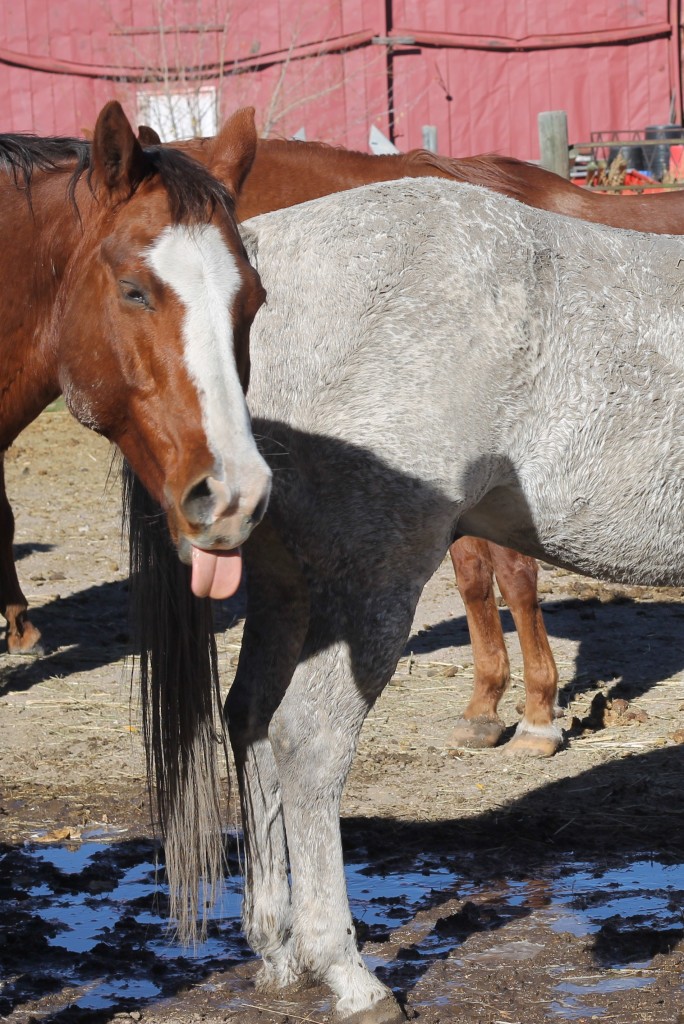 The first mile was good. The second was slower, but ok. By the third mile, I was pulling his head back around every few steps. He wanted to go home. He knew every step he took was another step he’d have to retrace, and he wasn’t keen on having to walk back all that way. This is what we call “barn sour”. They just want to go back to the barn.

We passed a little country church, white boards shining in the sultry afternoon heat, surrounded by big oak trees and patches of deep orange daylilies. We rode past a house with two yappy dogs that came darting out, barking their silly heads off. They stopped a few yards away – unsure what to do with this beast. Sonny kept plodding, uncaring of their desperate barking.

Sonny finally stopped trying to turn back, and resorted to plodding. Now, you have never experienced plodding, till you have ridden a 30-year-old horse who is on a forced march. Head down, feet dragging, steps slowing imperceptibly till he was nearly at a standstill. I’d kick him in the ribs, and he’d pick up his feet and walk for five steps. Then he’d slow down. And down. And almost stop.

8 miles of southern Illinois summer heat and humidity, sweat pouring off me, bugs and flies annoying me and my horse.

My family was not a ranch family. Not even a farm family, really, although we had a varied menagerie over the years. My dad was a logger, mainly, with a lot of travel and seasonal work thrown in. He grew up farming with horses, and grew to dislike them immensely. Said he’d looked the backside of a team too long. But he loved me, so he told my Amish cousin to find me a horse. Well, one day my cousin showed up at my door with this old nag.

Sonny was a gelding whose entire life purpose had been to give kids rides at a big tourist park. He was trained to walk nose-to-tail with other horses, and completely ignore the kids who were bouncing, yelling, and kicking on his back. He was good at that. As long as we had him, we could put little kids on his back – as many as would fit – and set him loose with a halter and lead rope. He’d wander around the yard a bit, then go stand with his nose to a tree, as if tied there. No amount of them kicking and yelling would make him go. He was great at babysitting!

But for me, an awkward 14-year-old kid who was dreaming of Derby races and barrel racing, he was far and away too slow. I had no boots, no hat, no jeans. Just a long flowing dress, tennis shoes and a Mennonite head-covering. I didn’t know tennis shoes could be dangerous, I didn’t know flowing things can spook a horse, I didn’t realize just how odd I looked.

But it really didn’t matter. I was riding through farm-ground, down dusty country roads where only the occasional house broke up the fields of corn and soybeans. The heat rose in shimmery waves from the ground, day lilies lined the road in many places. Delicate Queen Anne’s Lace nodded in the sun, and honeysuckle vines tumbled thickly over sagging fences, filling the air with sweetness.

I would have enjoyed the ride more, had I not been kicking and coaxing Sonny the entire time. The last few miles were almost torture. Turtle-speed, we finally made it to the friend’s house. I was starting to feel sorry for Sonny, but when he saw a barn and other livestock, he came alive. Suddenly he was full of vim and vigor! I was cross with him. All that long, slow ride, and here he was; nearly trotting to the barn!
I had been sad to leave my horse behind for the summer, but after that frustrating ride, I was just glad to climb in the van with Mom and go home.

As a parent now, I look back at these kinds of things and realize why me and my siblings  are pretty independent. This was before cell phones were a thing. I was 14, and my dad sent me off through lonely country roads on an 8 mile ride. I was expected to find my way, even though I wasn’t totally familiar with that route. I was given basic directions and sent off. I had no water bottle or snacks. I simply climbed on my horse and rode away. Mom was waiting when I got there. (she went the faster route by the main road.) If dad or mom were worried about me, they sure never showed it. (I really don’t think they were worried.) Therefore, I wasn’t worried. If something happened, I was expected to figure it out.

We pass our fears and concern along to our kids. We are worried, so they are worried. They are more able than we think. Give your kid a bit of rope, mama! Don’t hover. Let them try new things and experience a little freedom! They might surprise you! 😀 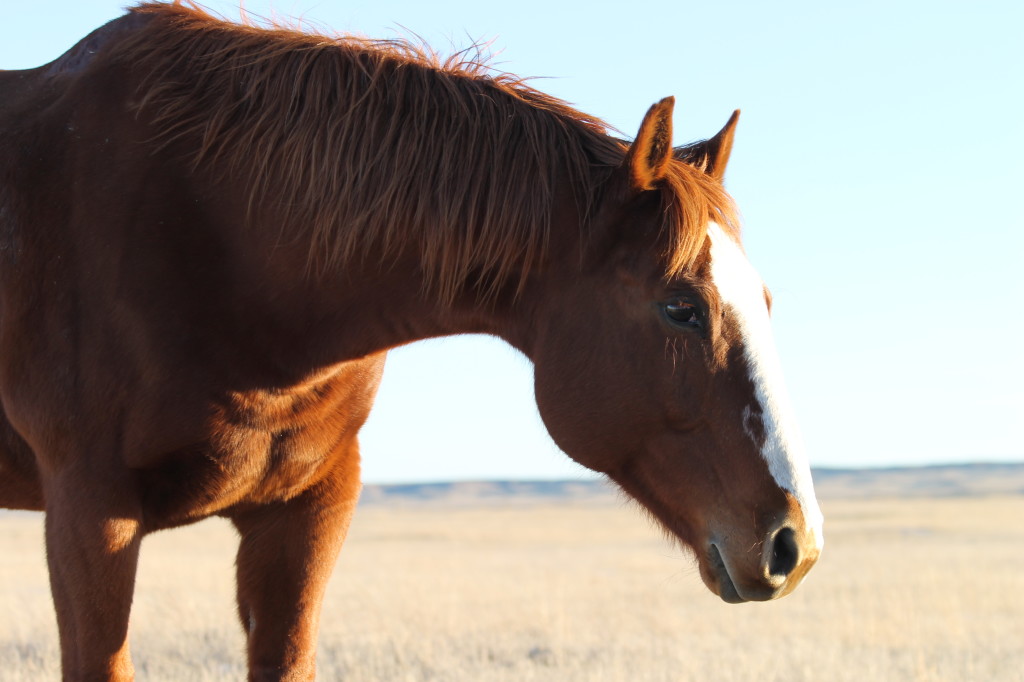